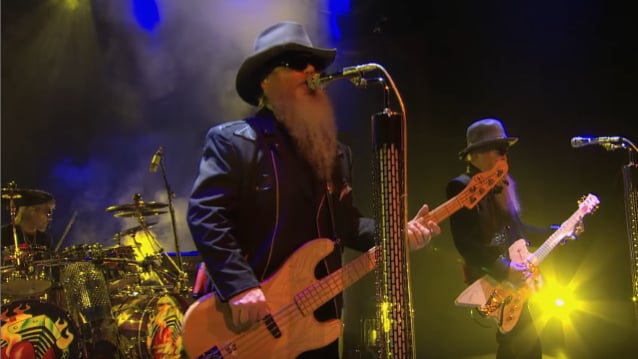 ZZ TOP will carry on following the passing of the band's bassist Dusty Hill.

Hill died in his sleep at home in Houston, Texas, according to the band's official web site. He was 72.

Trunk tweeted: "Received this just now via text from @BillyFGibbons regarding passing of Dusty Hill @ZZTop . Billy told me okay to share w/fans: As Dusty said upon his departure, 'Let the show go on!'.and…with respect, we'll do well to get beyond this and honor his wishes."

Trunk added in a separate message, "Also this from [Gibbons]: 'Dusty emphatically grabbed my arm and said, 'Give Elwood the bottom end and take it to the top.' He meant it, amigo. He really did.'"

The ZZ TOP concert scheduled to take place tonight (Wednesday, July 28) in Simpsonville, South Carolina has been canceled in the wake of Hill's sudden death. Refunds are available at points of purchase. Tickets purchased at LiveNation.com or Ticketmaster.com will be automatically refunded.

Funeral arrangements for Hill have not yet been publicly announced.

ZZ TOP played without Hill last Friday night (July 23) at the Village Commons in New Lenox, Illinois after he was forced to return to Texas to address a hip issue. Filling in for him at the gig was longtime guitar tech Elwood Francis.

On July 21, ZZ TOP canceled its concert in Evansville, Indiana because of a "health issue within the band," according to local news outlet Evansville Courier & Press.

ZZ TOP kicked off its latest tour less than two weeks ago in Manchester, Iowa. The trek, dubbed "A Celebration With ZZ Top", will continue in August with dates in the South, Midwest and Far West. In the fall, the legendary act, which was inducted into the Rock And Roll Hall Of Fame by Keith Richards of THE ROLLING STONES, will play dates in the East, South and in their native Texas. A residency at The Venetian Theater in Las Vegas that had been postponed from last year is now set to start in early October. Looking ahead to 2022, a coast-to-coast Canadian tour has been announced for April and May.

When ZZ TOP announced the tour, Hill — who joined the band a year after its formation in 1969 — commented: "They shut the door right after our 50th-anniversary tour and now it's back open. We're excited to get out there and play our music for everybody."

Received this just now via text from @BillyFGibbons regarding passing of Dusty Hill @ZZTop . Billy told me okay to share w/fans: As Dusty said upon his departure, “ Let the show go on!”.and…with respect, we’ll do well to get beyond this and honor his wishes.

Also this from @BillyFGibbons @ZZTop : Dusty emphatically grabbed my arm and said, “Give Elwood the bottom end and take it to the Top”.
He meant it, amigo. He really did.