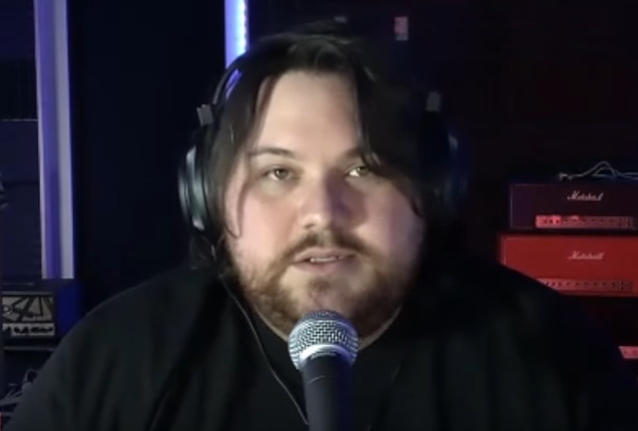 During HardDrive Radio's "Ask Anything Chat", Wolfgang Van Halen was asked to name the strangest or most unusual thing that's happened to him onstage. He responded (see video below): "There was a guy in San Jose who was flipping me off the whole time in the crowd. And throughout the show, I had this battle of my emotions on how to handle it. And by the end, I was, like, 'I could probably throw him out. That's a proper response to that, right?' So, yeah, I did. And it was good that there wasn't a guy flipping me off anymore. [Laughs]"

He continued: "Another one was — I think it was in Kansas City, in 2015, on the VAN HALEN tour, there was a ginormous bug — like, huge; the size of my phone — that landed on my dad's pedal board. But it had been on the stage making its way throughout the whole show, but by the time we got to my dad's solo, it landed right there, and he stopped playing the solo. He was, like, 'There's a big-ass effin' bug on my pedal board.'"

A pre-order for "Mammoth WVH" is available in various configurations, including exclusive color vinyl as well as limited autographed copies, via the band's online store. Fans that pre-order the album digitally will receive instant downloads of the single "Distance" and "The Howard Stern Show"-premiered track "You're To Blame". Both songs will be available via all global digital streaming partners as well.

Writing all of the songs and performing all of the instrumentation and vocals for the debut album, Wolfgang Van Halen set out to establish his own musical identity. From the rocking opening guitar riff on album opener "Mr. Ed" to the driving bass and drums on album closer "Stone", "Mammoth WVH" showcases the various musical influences that have inspired Wolfgang. Songs like "Resolve", "The Big Picture" and "Think It Over" are all sonically different from each other but unique to what MAMMOTH WVH is. The first single "Distance" — written as a tribute to Wolfgang's father and guitar icon Eddie Van Halen — is another side of "Mammoth WVH". The emotional video has been viewed more than four million times on YouTube. The song was not originally intended to be on the debut album, but due to the overwhelming response, it has been added as a bonus track. All of Wolfgang's proceeds from "Distance" are being donated to Mr. Holland's Opus.