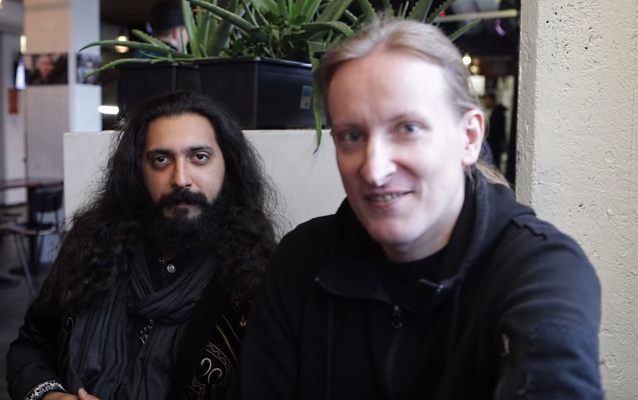 WINTERSUN vocalist/guitarist Jari Mäenpää and guitarist Asim Searah recently spoke with Finland's Tuonela. The full conversation can be seen below. A few excerpts follow (as transcribed by BLABBERMOUTH.NET).

On the band's plans to record new music:

Jari: "After this summer when we finish all these [15th] anniversary shows, [I'll] go home. Then I'm just focusing on new stuff. Currently I'm working [on] several albums at the same time, including 'Time II'. I don't know yet what the next album is going to be, but the plan is to do more crowd-fundings and to build the WINTERSUN headquarters. People will hear it soon enough."

On the benefits of fan patronage:

Jari: "It helps us a lot, and I think the fans feel cool when they know they can directly help us to make music for them. It's kind of [an] interactive relationship that's really cool."

Jari: "There's no middleman — help us, and we'll make music for you."

On Searah becoming an official member of the group:

Jari: "It feels great to me. I can focus on my singing. I think he fits the band perfectly. [He] has a great energy; he's a great guy; [a] killer guitar player — he can do all my stuff."

Asim: "I'm trying. Of course, I'm learning as well from time to time. It's quite awesome to be a part of it."

Jari: "We had an extensive period [where] we interviewed a lot of guitar players, and Asim's playing had the most balls."

Asim: "Everything worked out from day one pretty awesome, like it was as if it was meant to be."

Jari: "He had to work for it, but he totally deserved it."

Asim: "I was known more as a vocalist in the Finnish scene. I asked Jari immediately when he released [the audition information] — I think it was the same morning — I wrote immediately, 'I'm very interested,' and Jari was like, 'Yeah, but you need to have the skills, and you need to play the guitar.' He didn't remember that I played the guitar at all, basically. Jukka [Koskinen, bass] said to everybody else but later on told me [that he said], 'What is he going to do — he's going to sing the parts, or a capella the guitar stuff?' It came as a surprise to them as well, but it came to a surprise to me also that I wanted to pursue it that way too. Everything just worked cool."

Jari: "Basically, I kind of need to be bored — like, nothing on my calendar. Then I write the best stuff, just sitting on my couch playing the guitar. I usually just play chords and hum melodies — imagine the melodies in my head. If I come up with something interesting, then I record it into my iPhone. Then I put all those recordings into my computer and archive them in folders. Then later on, I start to build on these different ideas... When I do a riff or something, I already kind of hear in my head what sort of synth sounds and orchestration should be on top of that riff."

On his bandmates' contributions:

Jari: "So far, I've done pretty much everything myself... but we'll see what happens in the future. I'm totally open for the guys bringing ideas, but I feel like I need to have the final say."

Jari: "I always want to have certain parts be like they are in the song, but then there's a lot of room for guys to bring their own identity."

Asim: "There are certain songs that you want to keep it the way they are strictly, and there's some songs we like to — let's say in our world — jam around. But I don't think there's much room in the kind of music that we play that there's much room to have [a] jam session going on on stage."

Jari: "All the orchestrations are coming from backing tapes. There's no real orchestration on the stage, so we have to play a click track and follow the song. But sometimes we change little parts here and there in the songs — have a longer break here, or little stuff."

Asim: "There's not much space to jam around with the technicality of the music we play, [but] the space that we get, we use it to our benefit as much as we can."

Jari: "It's nice to have something different, something a little extra for live [as compared to the] album, but mostly, we try to play the songs like they are."

WINTERSUN's next album will be the follow-up to "The Forest Seasons", which debuted at No. 1 in Finland upon its 2017 release.