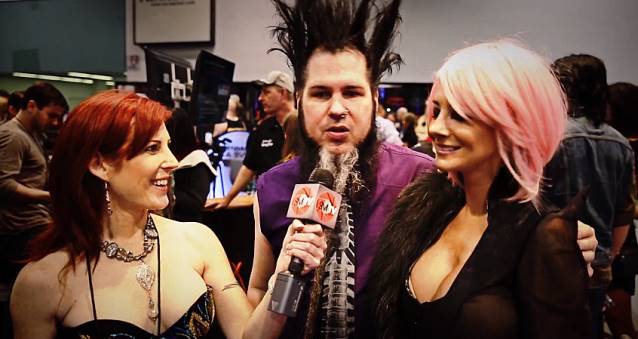 Jenn Findley of Seattle Music TV conducted an interview with STATIC-X frontman Wayne Static at this year's NAMM (National Association Of Music Merchants) show, which took place January 23-26 at the Anaheim Convention Center in Anaheim, California. You can now watch the chat below.

In a recent interview with the LA Music Blog, Static stated about his new solo band: "I had a few changes in 2012. One of my bass players, Brent [Ashley] — he left. Then Frankie came in, then Frankie left. I've got this guy Andrew Cole right now, who's awesome. He plays in a band right now in L.A. with the COAL CHAMBER guys, with Meegs and Mikey… And then Ashes, he's been my guitar player since day one, so he's my guy. And then drums, I'm bringing back Bevan Davies, who did the last two STATIC-X tours. He lives in Atlanta. I've already toured with him, so I'm not worried about him. He's really solid. He's got that real old-school STATIC-X feel, ya know? The first STATIC-X drummer, Kenny Lacey, had this basic kind of style and that's what Bevan does — just real solid and basic. It's really cool playing the old shit with him because he really nails it."

Wayne also spoke about playing smaller clubs on his upcoming run, saying: "Ya know, we're starting slow, and I don't have the STATIC-X name anymore. I made a deal with Tony [Campos], my old bass player, last year. He's the only legal STATIC-X member besides me. I paid him a bunch of money [m 2012] to use the name, and he's just a greedy motherfucker, man. He just hates me to death. He's trying to gouge the shit out of me. I made him an offer to give him 25 percent of my net profits and he refused it. He wants this outrageous number. [laughs] He wants more money than I make in a year, and he's just doing it on purpose because he hates me for whatever reason. But he doesn't want to play in STATIC-X, though. I gave him the opportunity, like, 'Do you want to tour with us?' He's like, 'No.' Okay, well, 'Will you let me use the name?' 'No.' [laughs] He's basically just telling me, like, 'Fuck you.' Ya know? [laughs] I'm like well, at least my name is Wayne Static and people know who I am. I'm not just some jack-off bass player that used to play in a band called STATIC-X. I'm like, 'Fuck you,' ya know? I'm still playing in a band called WAYNE STATIC. It's a little bit smaller because not everyone knows the name WAYNE STATIC, and everyone knows the name STATIC-X, but we're gonna build it up. I basically made the choice that STATIC-X is done, unless Tony changes his mind at some point, which I doubt he will. We're just going to build on STATIC-X. The funny thing is that it's still the same guys that played with STATIC-X last year, the same songs basically…we just can't call it STATIC-X."