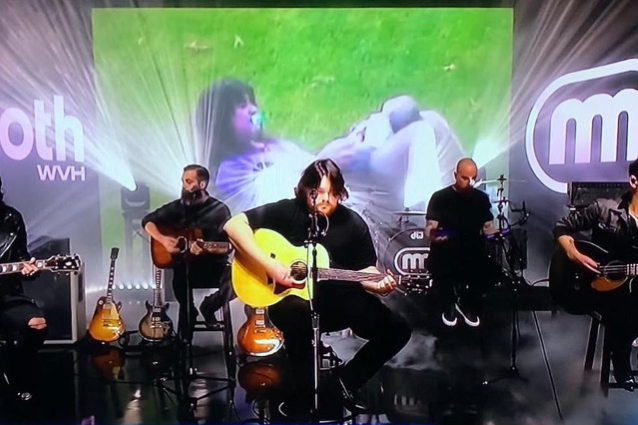 Wolfgang Van Halen's solo band, MAMMOTH WVH, performed an acoustic version of its song first single, "Distance", on "Today" show this morning (Friday, February). The band comprised of Wolfgang Van Halen (guitars/vocals), Ronnie Ficarro (bass/vocals), Jon Jourdan (guitars/vocals), Frank Sidoris (guitars) and Garret Whitlock (drums) played the track which was written as a tribute to Wolfgang's father and guitar icon Eddie Van Halen. The song, which Wolfgang wrote while his late father battled cancer, was not originally intended to be on MAMMOTH WVH's upcoming self-titled debut album, but due to the overwhelming response, it has been added as a bonus track. All of Wolfgang's proceeds from "Distance" are being donated to Mr. Holland's Opus.

"Mammoth WVH" will be released on June 11 via Explorer1 Music Group/EX1 Records.

Asked how his family members reacted to hearing "Distance" for the first time after it was released, Wolfgang told Lou Brutus of HardDrive Radio: "Well, all the close people in my life had already heard it [well before that], because the idea on its own was in existence for a while; it just hadn't been fully finished and then mixed. The last 10 percent of the work is what we had to do in order to get it out there and get it mastered and all that. But, yeah, it moved everyone I showed it to. I remember when I showed it to dad for the first time, maybe it was out of pride or also just the song in general, he cried when he heard it. And I don't think he was aware of the significance of it for me; he just understood it as a song about loss."

Wolfgang went on to say that he was a bit surprised by the overwhelmingly positive response to "Distance". "I think it allowed a sense of closure for many people, in a way, which was something I wasn't expecting," he said. "It was just kind of a thing for me to put out there and be, like, 'Hey, this is for dad.' But to see not only such a huge amount of people get closure for my father's life, in a way, but to have so many people relate to it in general with a loss of their own, because this year has just been so awful.

"I tend to write my lyrics from a perspective where it's, like, I may be drawing from a personal experience, but I like to write it in a way where somebody can derive their own meaning from it," he explained. "And it was nice to see that happen to a certain extent, because I think anybody can relate to a monumental loss in their life."

According to Wolfgang, it was his father's unwavering support that helped give him the impetus to complete the debut album from MAMMOTH WVH and embark on a solo career.

"His pride is what keeps me going to this day," he said. "In a way, it's almost like I don't care what anybody else says about me, because my dad believed in me more than any other."

"Distance" is an open letter to Wolfgang's father, declaring "no matter what the distance is, I will be with you." The accompanying music video for the song is created from a collection of family home movies through the years and offers an inside look in to one of music's most notable personalities. Chronicling the family through the years, the video ends with a touching voicemail left from Eddie to his son.

.@WolfVanHalen, son of late guitar icon Eddie Van Halen and Valerie Bertinelli, joins us to talk about his solo project #MammothWVH and the meaning behind his song “Distance.” pic.twitter.com/93SjMjZ6DU