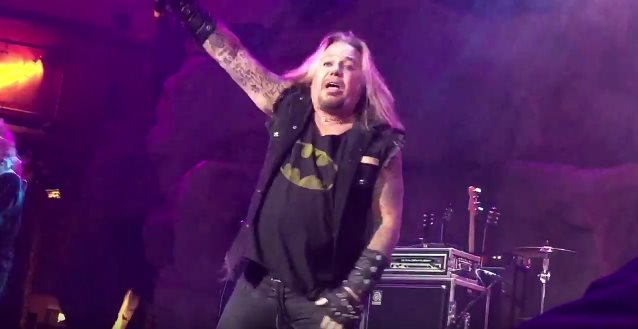 Fan-filmed video footage of MÖTLEY CRÜE singer Vince Neil performing with his solo band on January 28 at at the Wolf Den in Uncasville, Connecticut can be seen below.

In a recent interview with TheArnoldFans.com, Vince stated about the conclusion of CRÜE's "The Final Tour" and his plans for this year: "We finished up New Year's Eve, just about a year ago. Within ten days, I was on the first show of my solo tour.

"I'm someone who likes to be on tour constantly. [I am] taking a little bit of a break with the holidays right now, and actually next week, I start up again.

Neil explained to GreeleyTribune.com why he continues to play MÖTLEY CRÜE's hit songs during his solo live performances.

"I could play a lot of my solo stuff, and I'd get a lot of people in the crowd saying, 'What is he doing that for?' Neil said. "They'd be saying, 'Play [swear word] 'Dr. Feelgood', you [swear word].

"But I don't want to be that guy," he continued. "I want to be someone who shows appreciation for all our fans. Those people have all the love for the CRÜE stuff, and I was the guy singing those songs. That gave me a great life for 30 years."

Neil was also full of praise for his solo band, which continues to include Dana Strum and Jeff Blando from SLAUGHTER and drummer Zoltan Chaney.

"They're really energetic, and we're friends," Neil said. "There's none of the [bad] blood and the crazy ups and downs with MÖTLEY. We all get along really good."