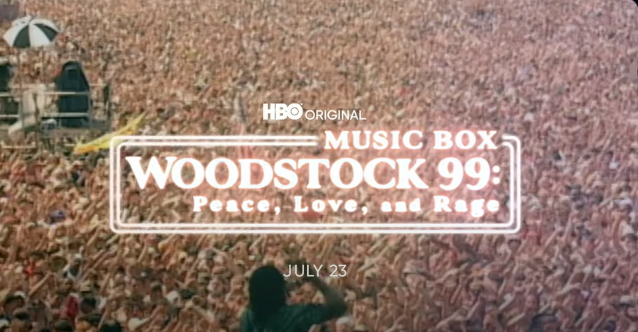 HBO's "Woodstock 99: Peace, Love, And Rage", the first film in the Music Box series, directed by Garret Price ("Love, Antosha") and executive produced by Bill Simmons (HBO's "Andre The Giant", "Showbiz Kids"), tells the story of Woodstock 99, a three-day music festival promoted to echo unity and counterculture idealism of the original 1969 concert but instead devolved into riots, looting and sexual assaults. The grim outcome earned the event the infamous distinction of "the day the nineties died."

"Woodstock 99: Peace, Love, And Rage" focuses a spotlight on American youth at the end of the millennium, in the shadow of Columbine and the looming hysteria of Y2K, pinpointing a moment in time when the angst of a generation galvanized into a seismic, cultural shift. Set to a soundtrack of the era's most aggressive rock bands, the film also reappraises the 1960s mythos, revealing hard truths about the dangers of rose-tinted nostalgia in the age of commercialism and bottom-line profits.

To coincide with the 22nd anniversary of the festival, "Music Box: Woodstock 99: Peace, Love, And Rage" debuts Friday, July 23, (9:00 - 10:50 p.m. ET/PT) on HBO and will be available to stream on HBO Max. The film kicks off Music Box, a collection of documentary films created by Bill Simmons, debuting in fall of this year.

"Woodstock 99: Peace, Love, And Rage" unfolds over three blazing hot days and nights of nonstop performances and heaving mosh pits in July 1999, and examines how the festival eventually collapsed under the weight of its own misguided ambition. The musical lineup reflected acts that dominated MTV and radio airwaves at the time and leaned heavily towards artists catering to a young, male demographic. Intense heat, lack of adequate sanitation and access to free drinking water agitated a crowd already at a breaking point. Shortcuts and cost-cutting measures had diminished security, allowing the anger and frustration of the mob to explode into unchecked rioting and destruction. As much as Woodstock 69 became known as a celebration of peace and inclusion, Woodstock 99 became a flashpoint for burgeoning white toxic masculinity.

Brimming with the high-energy vibrancy of a rock documentary, the film takes us onstage with the bands, behind-the-scenes with the organizers and to the cramped campsites, overflowing bathrooms and marauding groups of young men with alarming immediacy and access. The film includes expert insight from multiple points of view, including from organizers Michael Lang and John Scher, as well as from culture critics Wesley Morris, Maureen Callahan and Steven Hyden. First-hand accounts from musicians, including THE ROOTS' Tariq "Black Thought" Trotter, KORN's Jonathan Davis, Moby, Jewel, THE OFFSPRING, CREED's Scott Stapp and festival attendees give an unfiltered perspective of the events, shedding light on how a weekend rooted in music and unity descended into chaos.

Woodstock 99 embodied the zeitgeist not only of the music of the time, but also the angst and attitudes of a generation. The documentary examines if an event rooted in the sentiment and ethos of the 1960s was actually the beginning of a darker sea change in American culture.

Subsequent films in the Music Box series, each helmed by a different director, will start airing in late fall 2021.