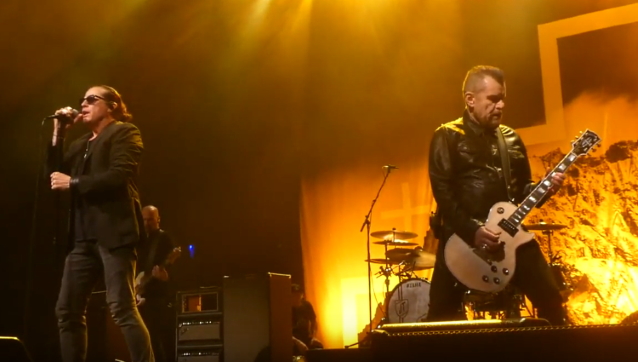 Fan-filmed video footage of THE CULT's December 13 concert at Sound Waves at Hard Rock Hotel & Casino in Atlantic City, New Jersey can be seen below.

THE CULT frontman Ian Astbury told Atlantic City Weekly in a new interview that the band is planning to work on new music in 2020.

"We've got a few pieces lying around in various stages of completion," he said. "The intention is to get together in the New Year and take a look at what we've got and decide how we are going to go about moving forward. It's is an essential part of any creative lifeblood."

THE CULT's last collection of new material, "Hidden City", was released in February 2016 via Cooking Vinyl. The follow-up to 2012's "Choice Of Weapon" was written by Astbury and guitarist Billy Duffy and was produced by Bob Rock, who has previously worked with METALLICA and MÖTLEY CRÜE.

Earlier this year, Astbury spoke to Global News about how the songwriting process has changed since he and Billy first met and started DEATH CULT over 35 years ago. He said: "Well, when we first met, we were living in his flat in Brixton; I'd sleep on the couch. [Laughs] So yeah, you could say it's very different. We spent a lot of time together and we were immersed in each other every day. We were always exchanging ideas but now we have very separate lives. We both have different lifestyles so when we do come together, we bring whatever it is that we've been musing on outside of that. Then we come into an intensive writing period. It's a different way of writing as opposed to like a gradual thing when we were younger because as you get older, your life takes over. But we've been managed to maintain a relationship over 10 studio albums and three decades so it's still there; there's still a chemistry that works.

THE CULT has spent the last few months touring in celebration of the 30th anniversary of its "Sonic Temple" album. The LP catapulted THE CULT into superstar status and remains their most commercially successful release. It has sold over 1.5 million copies in the U.S. alone and was certified platinum in 1990. It made it to No. 10 on the Billboard charts, and several of the album's songs remain rock-radio staples to this day.

"The Cult: Sonic Temple 30" has been released as a deluxe box set and a five-CD set. Plus Beggars Arkive reissued "Sonic Temple" on double LP, which has been out of print for over 20 years.