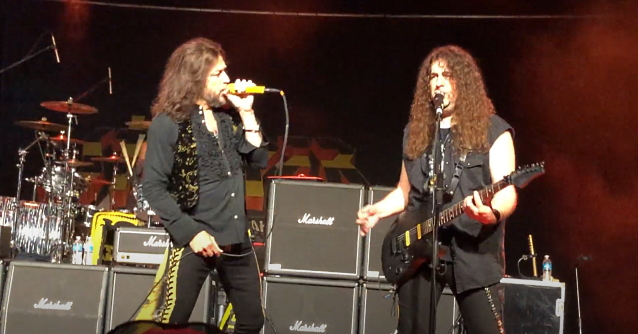 Fan-filmed video footage of STRYPER's September 9 concert in Green Bay, Wisconsin can be seen below.

STRYPER guitarist Oz Fox is sitting out the band's current tour dates while he is recovering from the first of his brain surgeries to treat one of the tumors that were found in his head three years ago. Filling in for him at the shows is Howie Simon (JEFF SCOTT SOTO, GRAHAM BONNET).

Prior to the Green Bay concert, STRYPER frontman Michael Sweet took to his social media to write: "Just to clear up a few things: Howie Simon is filling in for Oz for the shows that we have booked this year. He does an absolutely amazing job and obviously so since WINGER and TESLA use him as well for their fill in dates. Simple as that. If we didn't feel comfortable using Howie we wouldn't. We do and we're honored to have him. Also, this band has never sounded better than we do now with [bassist Perry Richardson].

"People (and I mean very few people) may complain because we don't have the original lineup but Perry is the cream of the crop. Personally, musically and spiritually. Period. He's taken this band to new heights and we couldn't be more proud to have found him and to have him.

"We're about to perform (tonight) having not played live in almost 2 years and with basically no rehearsal. Am I making excuses? Hell no! I'm simply saying that we're rehearsing as we go and trying to find our groove. We'd be doing the very same thing if Oz was here now.

"So, come out and enjoy the shows. We're just happy and humble to even be able to play is this absolutely insane world. The music business got hit the hardest and continues to take blow after blow. To be able to perform on a stage during the most volatile times of our lives is beyond miraculous. It's heavenly".

In early August, Oz said that he felt "it would be best" for him to take the rest of the year off from touring "for some solid recovery time" following surgery. "Another big project is coming for STRYPER in January and I really would like to be in my best shape for the task," he wrote on social media. "With all of that in mind, I have strongly encouraged my brothers in the band to continue with booked shows coming up in the next few months with our dear friend Howie Simon covering my duties. Howie is an amazing guitar player and vocalist and I trust him to fully 'out-shred' me for those up and coming dates! So I am trusting you all to welcome him with open arms so the band can continue to work in my absence."

Fox's tumors — one by his ear and the other in the back of his brain — were discovered when he suffered his first seizure in August 2018 while performing with SIN CITY SINNERS at Harrah's in Las Vegas. Over the past two and a half years, both tumors had grown and were posing a serious health risk to the guitarist, who turned 60 in June. Specifically, the tumor behind the ear, if it continued to grow, could have caused hearing loss, balance, vision and spinal problems, while the tumor in the back of Oz's brain was in the area where left side of his arms, hands and body operate. Removing it could have affected the upper left motor function and potential ability to recognize faces and objects.

Within weeks of Fox's original August 2018 seizure, STRYPER toured Australia and Japan as a three-piece, and later recruited Simon to fill in while Fox was unable to go on the road.

Just to clear up a few things:

Howie Simon is filling in for Oz for the shows that we have booked this year. He does an...