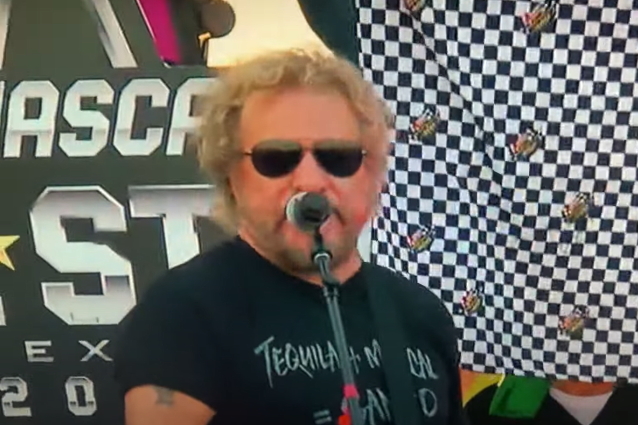 The Red Rocker himself, Sammy Hagar, and fellow guitarist Vic Johnson played Hagar's classic guitar rock song "I Can't Drive 55" as part of the pre-race festivities for the 37th annual NASCAR All-Star Race yesterday (Sunday, June 13) at Texas Motor Speedway. The two guitarists performed the 1984 radio and MTV hit from a stage located in the Texas Motor Speedway grandstands at Section PL 102. Check out video of their appearance below.

Hagar rose to fame in the 1970s with the band MONTROSE and the now-classic "Rock Candy". He then began a very successful solo career with songs like "There's Only One Way To Rock", "Your Love is Driving Me Crazy" and "Bad Motor Scooter". His success continued as the lead singer for VAN HALEN from 1985 to 1996. Since 2014, he has played in the supergroup SAMMY HAGAR AND THE CIRCLE with Johnson on guitar, former VAN HALEN bassist Michael Anthony on bass and Jason Bonham, son of legendary LED ZEPPELIN drummer John Bonham, on drums.

Johnson is a guitarist and Los Angeles native best known for playing with THE BUSBOYS, which appeared in the Eddie Murphy/Nick Nolte hit movie "48 Hrs." as well as performing on "Saturday Night Live". A heavy sought-after session musician, Johnson has played in various bands with Hagar since 1997.