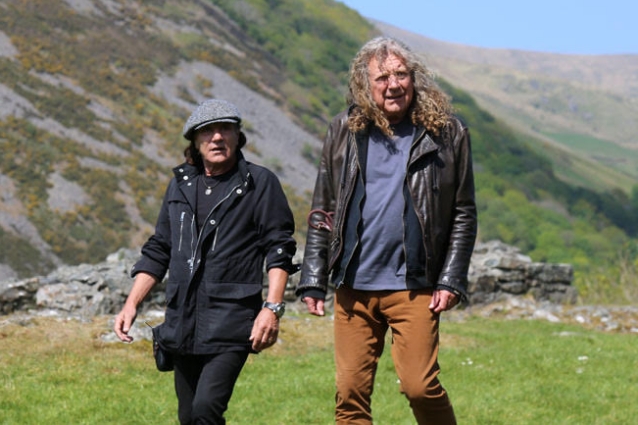 On this week's episode of "Brian Johnson: A Life On The Road", legendary AC/DC frontman Brian Johnson takes an excursion to North Wales where he explores a ruined castle with rock god Robert Plant, chatting about the LED ZEPPELIN vocalist's love of American blues, the band's creation and Plant's acclaimed solo career and award-winning collaborations

In the first-look clip below, Plant looks back at ZEPPELIN's founding in 1968.

"I suppose CREAM, THE GRATEFUL DEAD, the white blues thing was kickin' in," Robert said. "And you had that great West Coast thing going on with JEFFERSON AIRPLANE and stuff. You had a sub-culture develop, and we kind of attached ourselves to that. We didn't have any social statements to make. We weren't visionaries, in that sense. But we were, still by our age, at the time, still part of that huge movement of energy.

"I think for all of us, it was just serendipity that you could actually have four people… I mean me and Bonzo [John Bonham] had played a lot together," he continued. "Jimmy [Page] and John [Paul Jones] had been in various bands but they were session guys, and they were pretty well heeled, you know, pretty hot on the scene. But it didn't matter to me and Bonzo; all we wanted to do was get a square meal."

"Brian Johnson: A Life On The Road" finds the rocker going above and abroad to catch up with a slate of fellow icons, hearing their priceless stories from their time on tour and taking viewers to the places that helped define their legendary careers.