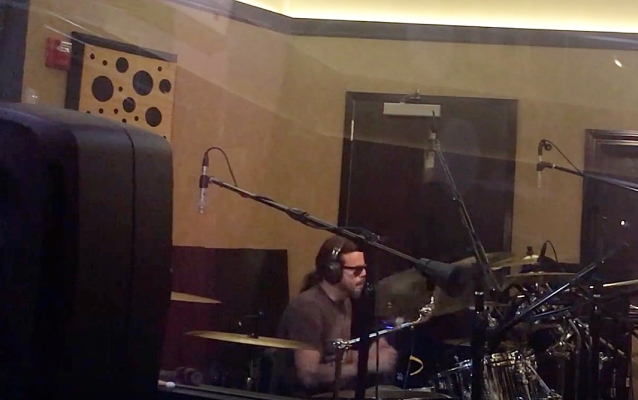 A short video of QUEENSRŸCHE singer Todd La Torre laying down the drum tracks for the band's latest album, "The Verdict", can be seen below. Released in March via Century Media Records, the disc was produced, mixed, and mastered by Chris "Zeuss" Harris (ROB ZOMBIE, ICED EARTH, HATEBREED) at Uberbeatz in Lynwood, Washington; Planet-Z in Wilbraham, Massachusetts; and Watershed Studio in Seattle, Washington.

Todd recently said that it was "logical" for him to play drums on "The Verdict" after original QUEENSRŸCHE drummer Scott Rockenfield made himself unavailable.

"I'm friends with Scott," Todd said during an appearance on "The MetalSucks Podcast". "I toured with him for five years. I did two records with him. I'm very familiar and very aware of some of the things that he does — a lot of the things that he does. So I recorded the drums, and I decided to show more reservation than to overplay. There's a lot of things I would have done more, but I didn't want to try to show off more drumming and do things just because I knew that everyone would hear it, and what will they think of my drumming, so I need to show it off. I wanted to just write drum parts that make sense for the songs, play fills that are appropriate, show the dynamics with some hi-hat work and some of the cymbal work that Scott would do — the double china, the alternating between the ride and the hi-hat. Certain things that are just very unique to the sound of QUEENSRŸCHE on the drums. And some things I did that I know he would never play, but that was just me having a little fun with a few things. But otherwise, I really tried to maintain the integrity of what I think sounds appropriate for QUEENSRŸCHE. And I wanted to create memorable parts that people can learn. I didn't wanna make it complicated. I didn't wanna play a drum fill every time there's a space to fill it with drums. I thought that too many are overplaying these days, and some of my favorite songs don't have a lot of overplaying. I mean, 'Empire' and '[Operation:]Mindcrime', those are very deliberate drum parts. And everything on this record that was played was done with a purpose. And until you peel the layers back to the songs and see where the kick drum is placed in relation to the vocal, in relation to the guitar riff, only then would you really understand and probably appreciate the placement of where the drum parts are the way they are — where they went and why. So I'm sure I'll catch a lot of criticism for what I did, but I'll also hopefully catch some promising positive words for what I did. And all I can say is I did double duty on the record, and no one can fault me for putting in the hard work and showing up."

For the past 27 months, Rockenfield has been taking time off from QUEENSRŸCHE's touring activities to spend time with his young son, who was born in early 2017. Filling in for him has been former KAMELOT drummer Casey Grillo.

Todd, who has played drums since the age of 13, admitted that Rockenfield "may not [ever] come back" to QUEENSRŸCHE. "I don't know, 'cause I don't talk to him," he said.

The singer also addressed disapproval from some fans over the fact that QUEENSRŸCHE's current lineup only features guitarist Michael Wilton and bassist Eddie Jackson from the band's original incarnation.

"Some people go, 'Oh, they're only down to two [original] members right now.' Well, so what?" Todd said. "We wish that Scott would have come back earlier. But ALICE IN CHAINS has two [original] members. ACCEPT has one member. JUDAS PRIEST has two members. FATES WARNING has one member. There's a lot of bands still putting out really great music that are kicking ass. It's not about one person. It's not about me. It's not about Michael or Scott or anybody else; it's about the collective. I think that this record shows that the strength lies in all of us participating and pulling all of our creative elements to share with each other."

He continued: "If people say, 'Well, what is QUEENSRŸCHE gonna sound like without Scott?' 'The Verdict' is exactly what QUEENSRŸCHE sounds like without his participation at all. However, Scott is a great songwriter; he's a cool guy; he's a great drummer; he has a lot of great ideas. That being said, this record, in my opinion, is better than some records that had the entire original lineup in the band. This is a way better record — in my opinion — than '[Operation:]Mindcrime II' or 'Dedicated To Chaos' that had outside writers. So, I think that there's a little too much emphasis placed on having this all-original thing. I mean, yeah, we still have two very important, crucial, original founding members of this band playing in QUEENSRŸCHE."