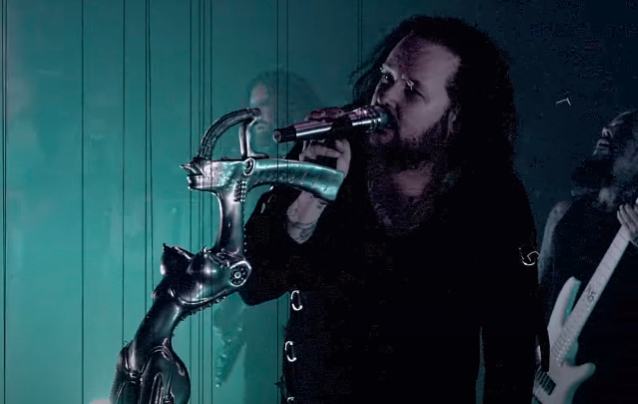 KORN's entire groundbreaking performance filmed inside of a living art installation celebrating the release of the band's 2019 album "The Nothing" was aired during Warner Music Group's first-of-its-kind virtual music festival, PlayOn Fest, supporting the COVID-19 Solidarity Response Fund for the World Health Organization (WHO), powered by the UN Foundation. You can now watch the concert below.

The band says: "On September 13, 2019, we held a private event for some of our biggest fans in Los Angeles, CA to celebrate the release of our album, 'The Nothing'. This special director's cut concert film, directed and edited by Sébastien Paquet, is for all of you who have supported us and weren't able to attend this exclusive event inside of a living art installation. We hope you enjoy the experience."

A few months ago, KORN singer Jonathan Davis told Kerrang! magazine about "The Nothing" record-release show: "[We played] in this little warehouse, with around 50 diehard fans, and we played three or four new songs. We had suspension artists, stuff like the wire man from the album cover, hanging there spinning. It was really cool."

"The Nothing" was released via Roadrunner/Elektra. The follow-up to 2016's "The Serenity Of Suffering" was once again produced by Nick Raskulinecz.

In addition to first single "You'll Never Find Me", KORN released the "Cold" and "Can You Hear Me" songs prior to "The Nothing"'s arrival.

KORN guitarist James "Munky" Shaffer told Dread Central about "The Nothing": "We put a whole year into this record. That's something we hadn't done since 'Untouchables' in 2002. So, we really sat with these songs, lived with them, had time to reflect on them, and then went back and worked on them some more. We didn't rush it through just to put something out in order to get back on tour. I know a lot of bands do that; we've done it in the past too — I'm guilty. But this time we wanted to spend time with our families and take our time to make some great music. So, we spaced things out and really enjoyed being in the moment."