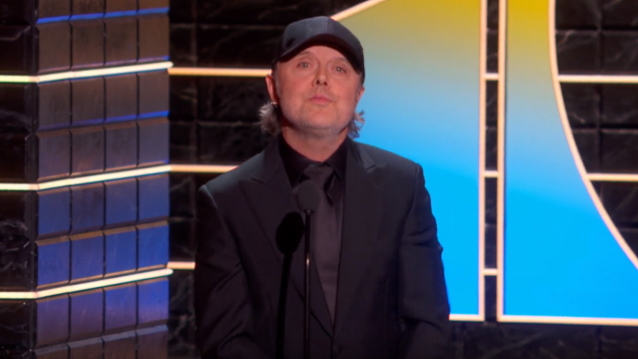 METALLICA drummer Lars Ulrich paid tribute to Michael Tilson Thomas (MTT), music director of the San Francisco Symphony and co-founder of the New World Symphony, at the 42nd annual Kennedy Center Honors, which was held on December 8 in Washington, D.C. Ulrich delivered a spoken tribute and took part in a performance with more than 40 alumni of the New World Symphony, America's Orchestral Academy (NWS), which MTT co-founded 32 years ago as a training ground for the next generation of classical musicians.

Ulrich said about Michael Tilson Thomas during his speech (see video below): "Ladies and gentlemen, why is a member of METALLICA here to honor the world-renowned maestro Michael Tilson Thomas? Well, in addition to being one of the most esteemed conductors of all time, he's also an educator and scholar with a deeply profound understanding of music — all music; from medieval to hard rock; from Mosolov to, well, METALLICA. This past September, that rampant, infectious energy finally found itself in my creative wheelhouse when METALLICA joined forces with MTT to once again celebrate and collaborate with the San Francisco Symphony for the 20th anniversary of our 'S&M' project. And Michael, for that I will be forever grateful."

He continued: "So, to answer the question: why is a member of METALLICA here on the stage? It is because your genius and your vision, Michael, speaks to, and inspires, countless musicians and artists across all genres, across all creative fields and across all continents on this beautiful planet."

The Kennedy Center celebrates icons who have left an indelible stamp on the nation's collective cultural consciousness, according to chairman David M. Rubenstein.

METALLICA first teamed with the San Francisco Symphony in 1999 for the live album "S&M", four years after Thomas became the symphony’s music director. This year, Thomas, as conductor, joined with Ulrich and the rest of METALLICA to celebrate 20 years since the band and the Symphony recorded "S&M", at a reunion concert before 18,000 fans at San Francisco’s Chase Center.

Earlier this week, Ulrich took to his Instagram to once again praise Michael Tilson Thomas, writing: "It was absolutely incredible to be part of the Kennedy Center Honors in Washington, D.C. this past weekend, and being given the privilege of celebrating Michael Tilson Thomas' creative achievements….including giving a shout out to the S&M2 project he was such an integral part of it."

The gala was televised last night (Sunday, December 15) on CBS.


It was absolutely incredible to be part of the Kennedy Center Honors in Washington, D.C. this past weekend, and being given the privilege of celebrating Michael Tilson Thomas’ creative achievements....including giving a shout out to the S&M2 project he was such an integral part of it. Congrats and much love to you MTT! #wanna #KCHonors #SandM2 @kennedycenter @mtilsonthomas