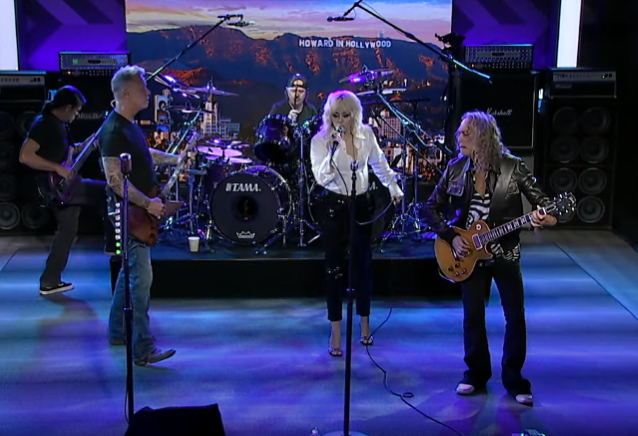 METALLICA performed its classic song "Nothing Else Matters" with pop star Miley Cyrus on SiriusXM's "The Howard Stern Show" yesterday morning (Thursday, September 9). You can watch video of the performance below.

METALLICA and Miley's appearance was in celebration of release of the remastered deluxe box set of METALLICA's self-titled fifth album — also known as "The Black Album" — which is being made available today (Friday, September 10) via the band's own Blackened Recordings. Also included is a companion set titled "The Metallica Blacklist", which is packed with covers by major recording artists. Cyrus is among the 53 musicians included in the covers set, which includes her version of "Nothing Else Matters", also featuring Elton John, cellist Yo-Yo Ma, RED HOT CHILI PEPPERS drummer Chad Smith, frequent collaborator Andrew Watt and METALLICA bassist Robert Trujillo.

Appearing via video link, Elton told Howard his decision to play piano on the star-studded cover was an absolute "no-brainer." "This is one of the best songs ever written, to me. It's a song that never gets old. Playing on this track I just couldn't wait because the chord structure, the melodies, the time changes — it's got drama written all over it," he said.

Miley, meanwhile, lent her voice to the song for other reasons. While sitting next to METALLICA singer James Hetfield, drummer Lars Ulrich, guitarist Kirk Hammett, and bassist Robert Trujillo in SiriusXM's West Coast studios, she told Howard she first performed "Nothing Else Matters" in 2019 at England's Glastonbury festival during a pivotal moment in her life.

"It was right before actually that the world knew I was getting a divorce, but I knew that I was," Miley said. "I had just lost my house in the fires … I was so heartbroken and my purpose was coming from this performance. I got sober at that time. I really pulled my fucking shit together. This song was what drove me to that place."

"My life in regards to love was falling apart, but I had my love for music," she added.

Elton said he cherished collaborating with Miley on the METALLICA song. "When I heard her sing 'Nothing Else Matters', I just couldn't believe it," he told Howard. "It's just astonishing, her voice. She's probably the best rock and roll singer out there, without question."

He had plenty more kind words for METALLICA, too. "You can't really define them," Elton said. "[They're] not a heavy metal band; they're a musical band. Their songs aren't just heavy metal; they're beautiful songs. This is just such a melodic song. It's fucking great, actually."