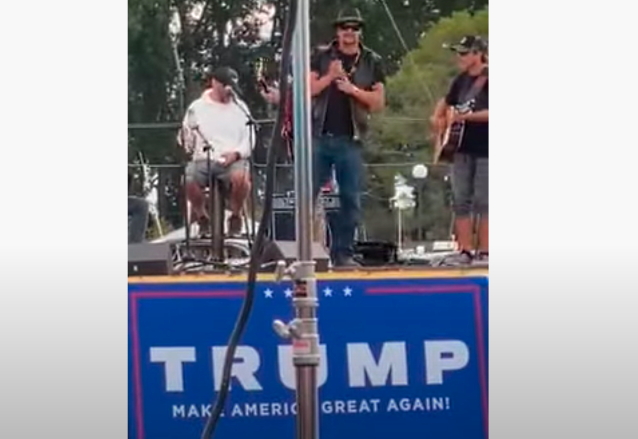 According to Detroit Free Press, Kid Rock performed a four-song set for the mostly maskless crowd of several thousand, with face coverings predominantly worn by some older attendees.

"If you believe in the leadership of Donald Trump, that you live and will always live and support, stand for the greatest country in the world, make some damn noise," Kid addressed the audience at one point during his set, which included renditions of the songs "So Hott", "Cowboy", "All Summer Long" and "Born Free".

Earlier in the day, Kid Rock revealed in an Instagram post that he received two steroid shots to to help him deal with ongoing "neck issues." He wrote: "Would make sense to cancel my appearance, but NO WAY! I will be there and will give it everything I have this evening. That is how important getting POTUS re-elected is too me and I could care less about the continuous attacks from the left wing media, etc, that have been going on for over 4 years now. It's the reason I have turned down countless interviews and TV appearances as I refuse to be their click bait."

Rock had reportedly flown in from Nashville earlier Monday, accompanied by a film crew shooting an upcoming career documentary.

This past January, Kid Rock posed for a photo at Trump International Golf Club in Palm Beach, Florida, with Donald Trump Jr. The musician, whose real name is Robert James Ritchie, was wearing a t-shirt mocking House Intelligence Committee Chairman Adam Schiff, who helped lead both House Democrats' impeachment inquiry and the House intelligence committee's investigation into Russian interference in the 2016 election.

Back in 2016, Kid Rock showed his support for the president by selling a line of Trump-themed T-shirts. Among them was a shirt that Rock was photographed wearing, on which states that voted red were labeled "The United States of America" and states that went blue were called "Dumbfuckistan." Another shirt said "God, Guns And Trump," while a third read "_onald Trump: The 'D' is missing because it's in every hater's mouth."

Rock first announced his support for Trump in early 2016, telling Rolling Stone: "I'm digging Trump. I feel like a lot of people, whether you're a Democrat or a Republican, feel like if you get Hillary or Bernie, or you get Rubio or Cruz or whoever, there's going to be the same shit... My feeling: let the motherfucking business guy run it like a fucking business. And his campaign has been entertaining as shit."

Rock, who generally leans to the right, also supported Mitt Romney in 2012.