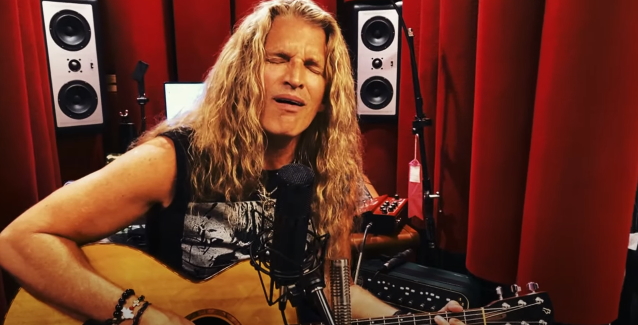 Video of GREAT WHITE singer Mitch Malloy performing a solo acoustic cover version of the JOURNEY classic "Open Arms" can be seen below.

Mitch is perhaps best known for his brief stint with VAN HALEN after the band split with Sammy Hagar. In 1996, Malloy was invited to Eddie Van Halen's studio to try out for the group and recorded a demo of the classic "Panama" before being told by Eddie he got the gig. However, his joining VAN HALEN was reportedly overridden by then-manager Ray Danniels, who wanted Gary Cherone (EXTREME) as Hagar's replacement.

Malloy's involvement with VAN HALEN is the focus of a short documentary, "Mitch Malloy: Van Halen's Lost Boy", which was uploaded to YouTube in 2013.

Malloy joined GREAT WHITE as the replacement for Terry Ilous, who was fired from the group in July 2018.

Mitch, who relocated to Destin, Florida from Nashville, Tennessee in 2019, told Destin Life about how he landed the GREAT WHITE gig: "I had a friend who knew some guys in the band, and one day he and I were talking, and he just mentioned, 'Hey, I think GREAT WHITE could really use you. They're looking for a new singer.' It just all worked out. It's been great, and it also allows me to pursue my solo projects."