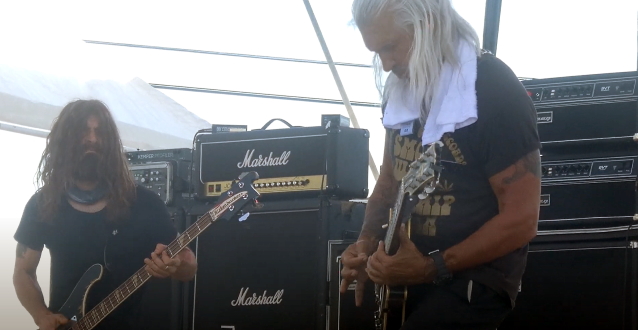 Fan-filmed video footage of GEORGE LYNCH & THE ELECTRIC FREEDOM's June 5 performance at the Live United Live Music Festival in Sunbury, Pennsylvania can be seen below.

Earlier this month, it was revealed that Lynch has set ELECTRIC FREEDOM as the new name of his "touring entity" after deciding to retire the LYNCH MOB band name last year.

Last August, Lynch announced that he was ending LYNCH MOB due to the racial insensitivity of the moniker, saying he will no longer record or perform under that name.

The news of Lynch's new band name was broken by BULLETBOYS drummer Jimmy D'Anda, who occasionally performs live with George. D'Anda revealed on his Instagram that he would join Lynch and bassist Michael Devin (WHITESNAKE) at the Live United Live Music Festival. He wrote: "On our way to the @georgelynchofficial electric freedom (his new band name) gig he done went 3 piece Michael Devin moi and senior Spooky #rocknroll #summer #comingsoon".

Five months ago, Lynch offered a lengthy explanation for why he was ending LYNCH MOB during an interview with George Dionne of Metal Express Radio. Addressing questions about why it took him three decades to call it quits with LYNCH MOB, George said: "When we first formed the band in '89, the name had sort of already been around. While I was in DOKKEN, it's what I called our little group of guitar fans — I had picks made; it was kind of a little subculture within DOKKEN. When we started working on developing and building the band after DOKKEN broke up, that was just the name that we always thought we'd use, 'cause it was a perfect fit — it's my name, and it describes it pretty well. And, of course, the negative connotations were always there, and I was aware of 'em, but not as aware as I probably should have been. [Laughs]

"I had made numerous attempts over the decades to kind of let that name go and had walked that back for multiple reasons — usually because of business considerations," he continued. "For instance, if you try to go out on a tour and not use the name, promoters aren't gonna be happy with you changing it. People aren't gonna know who you are. They're not gonna show up, because what's THE GEORGE LYNCH EXPERIENCE, or whatever you call it. Or record labels are not interested, because it's a brand that they can count on and sell a certain many albums or whatever.

"For instance, the LYNCH MOB record 'Smoke This' that came out, I think, in '99 or 2000, that was not supposed to be a LYNCH MOB record; that really wasn't anything to do with LYNCH MOB. At the end of the day, after the record was done and we were delivering it to the label, they insisted on using that name as insurance. And if I hadn't agreed to that, we wouldn't have had a record. That's the kind of pressure I'm talking about.

"But then, with the onset of everything that's happened in the last year, I didn't have that kind of pressure anymore," George added. "I could take it or leave it at this point. And I didn't really feel comfortable with it; I didn't feel comfortable with the name. 'Cause I'm a very progressive person politically, and it just so flies in the face of everything I believe in, and it makes it hard. It makes it hard to have relationships with people and explain yourself, and I got tired of rationalizing it. I think the music is bigger than that, and it's had a great run.

"Another reason, too, is the band fell apart again. The band has fallen apart so many times, I can't even count. And it was just, like, 'No more Oni [Logan, vocals], no more Brian Tichy [drums], no more this guy, no more that guy. Oh, great. Now what do I do?' It's, like, 'Okay, build another band from scratch, call it LYNCH MOB?' No. How about just build something new? It gives me a lot more freedom to basically play anything I want live… I can go out and play everything from my catalog — new, old, covers, jams, you name it, and go deep and have fun and change it up every night."

Oni first hooked up with LYNCH MOB in 1990, but exited the group after the release of its first album, only to rejoin the outfit in the late 2000s.

Last August, LYNCH MOB celebrated the 30th anniversary of "Wicked Sensation" with a special limited print/deluxe edition of the album. "Wicked Sensation Reimagined" features re-worked and re-recorded versions of the LP's classic songs, and was made available via Rat Pak Records.