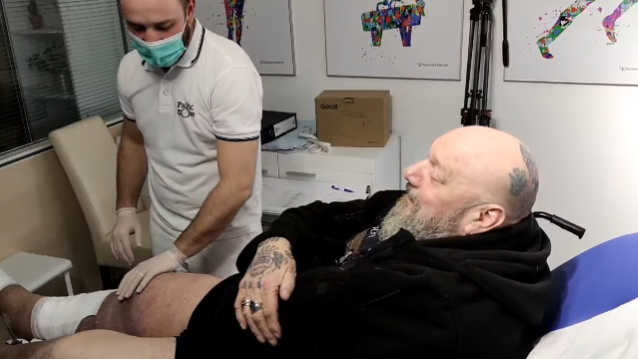 A lymphatic drainage massage relieves swelling that happens when medical treatment or illness blocks the lymphatic system. It involves gently manipulating specific areas of the body to help lymph move to an area with working lymph vessels.

The 63-year-old musician, who has battled a number of health issues in recent years and is currently in a wheelchair, traveled to Croatia to undergo knee surgery.

Last January, Kastro Pergjoni, operations director of the Cart & Horses pub in Stratford, London, England where IRON MAIDEN made its live debut in 1976, launched a crowdfunding campaign on JustGiving for Di'Anno to be treated privately. More than £13,000 was raised — roughly the cost for surgery on one of Paul's knees. A second crowdfunding campaign was launched over the summer and has raised nearly £10,000 of a £15,000 target.

Di'Anno reportedly underwent an operation in 2016 to remove a "rugby ball-sized abscess" on his lungs and required a knee-replacement operation on both knees after getting involved in several motorcycle accidents over the years. As a result, Di'Anno was forced to sit down while performing at his most recent shows.

Di'Anno recorded two classic albums with IRON MAIDEN — a self-titled effort in 1980 and "Killers" in 1981 — before being fired and replaced by Bruce Dickinson. He went on to front a number of other bands, including KILLERS and BATTLEZONE, and released several solo records.

In March 2011, Di'Anno was sentenced to nine months in a U.K. prison after he falsely collected government benefits by claiming he suffered nerve damage to his back that prevented him from working.

Di'Anno completed his first North American tour in early 2010, 17 years after he was deported following a prison term for guns and drug offenses.

Pergjoni, who has been behind Cart & Horses since 2016, leasing the pub from the building's owners who are converting the beer garden and car park into flats, discussed his fundraising efforts during a 2020 appearance on the "Uncle Steve's Iron Maiden Zone" podcast. Asked if he has approached the members of IRON MAIDEN themselves to contribute in some way to the Di'Anno campaign, Kastro said: "Myself, no, I haven't, to be honest, because I don't wanna put things… What's the best way to say it now? It's not up to me to go to them, because I have no connections with IRON MAIDEN themselves. Even when I [need to approach] Steve [Harris, IRON MAIDEN bassist and founder], I go through his friends or his sister sometimes or close friends that he's got to get stuff from him. But to go to MAIDEN for something that is related to MAIDEN, I don't think that it is me personally, or Cart & Horses, the ones to contact them. I'd love if they come forward and just cover whatever is left or say whatever, but I don't think it's down to me to go to MAIDEN. Because [Paul's] got friends and he's got connections with MAIDEN more than I have, so if MAIDEN wanted to, or if somebody else wanted to, they would have done it. But so far, nothing, unfortunately, no."

In a December 2019 interview with the Spanish web site Mariskalrock.com, Di'Anno said that he was lucky to be alive after developing a deadly infection several years ago. "I had sepsis in Argentina," he revealed. "I was very, very sick. I just about made it home to England and then straight to hospital. I had operations done on both legs. At the moment, I've only got one knee. The other knee has been taken out, but there's no new knee put in, so it's been a cement thing. But I wanna play, obviously, but I can't do that until I'm fixed. I haven't stopped playing music, and I've got no plans to retire — I wanna keep playing — but I need to get well."

Elaborating on his recovery process, Di'Anno said: "I'm not getting better and better — not yet, until I've had both of my knees operated on. The next operation is gonna be to take my left knee out and then put a replacement straight away, which then I've gotta do rehab to try to stand up on that one leg. And then I can sort of move about on crutches after a while, which would be fantastic. I may have to sit down on the stage, but if I can get up on one leg, it makes it easier for flying and things like that. I still may have to travel around on a wheelchair a bit, but if I'm playing on stage in a wheelchair, at least I can hop about on the crutches and then maybe sit down and sing. Unfortunately, this is gonna be the rest of my life, because of sepsis. I was so lucky. The sepsis really hits you hard, and on the London plane home from Argentina, everyone was saying to me, 'Hello, sir. Are you okay? Are you okay?' And I'm, like, 'Yeah, why don't you fuck off and leave me alone?' sort of thing. I didn't realize I was actually dying. And when I actually got home and I collapsed on the floor, I had my cell phone with me. I was on my own, 'cause my wife and kids were over in America. I got the ambulance people. They came down and they kicked my door in and took me to the hospital. I spent eight months in that hospital... And you've got 45 minutes to pump you full of antibiotics or you'll die. I just about made that."

Pressed about whether he is optimistic that he will be able to return to the stage someday, he told Mariskalrock.com: "Yeah. Fuckin' damn right. If I can't play music, I might as well fuckin' kill myself… I may have to sit down on the stage in a chair, but at least I can go back on stage… And then, when they do the right leg, then I'll be all right to do everything. It's gonna take time."

The first day of treatment (lymphatic drainage) was good, full of laugh and positive energy. Paul Andrews enjoyed in collaboration with doctors. We can see the progress on the early beginning.