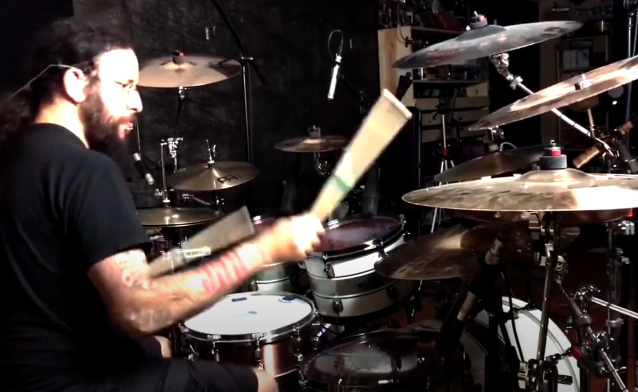 Video footage of drummer Mike Heller playing his tracks for FEAR FACTORY's long-awaited comeback album can be seen below.

Earlier this month, FEAR FACTORY guitarist Dino Cazares was interviewed by Dave "Higgo" Higgins of Australia's MMM Hard N Heavy radio station about his decision to launch a GoFundMe campaign to assist him with the production costs associated with the release of the new LP.

Speaking about wanting to take the already-completed 2017 recordings for the new FEAR FACTORY album and update them before releasing the effort next year, Dino said: "One thing I wanted to make clear is that, at the time, it's public knowledge that we were all going through a lot of legalities regarding the FEAR FACTORY trademark, the FEAR FACTORY name. So, when we were recording this record, there was no guarantee that it was gonna be called FEAR FACTORY at all, because at the time that we were going through these legalities, everything was on hold and the courts owned the FEAR FACTORY name — they controlled the FEAR FACTORY name. So, when we were actually recording the record, there was absolutely no certainty whatsoever that it was gonna be called FEAR FACTORY. As a matter of fact, fans had found this out, and they were actually trying to help us come up with a name, and they had come up with some pretty creative names that I was definitely considering. But, luckily, things worked out and I won my lawsuit and I was able to regain ownership of the FEAR FACTORY name. Now, fast forward to 2020, again, I regained the name in July. I went back and revisited what we recorded, and I was, like, there are some things that are just missing on this record that I just wanna improve and make better for everybody — for everybody to enjoy a great FEAR FACTORY record."

Regarding recent statements posted on the social media pages of FEAR FACTORY singer Burton C. Bell which were of a derogatory nature with respect to the GoFundMe campaign, calling it a "scam" and insisting that Bell would not "benefit" from the fundraising effort, Dino said: "I don't really know who made those comments. Those are on Burton C. Bell's Instagram and other places that he's commented on, but that's not the guy that I know; that's not the Burton I know. Burton does not lash out at people on Instagram or Facebook — none of his social media is like that. That's not the person I know. So whoever is controlling his social media might be the one that's misinformed. Now, those comments didn't sound like it came from somebody who's been in the music business for 30 years. Those comments sound like somebody who had no knowledge of how the music business works. And the reason I say that is because of the comment that said that they don't benefit from this GoFundMe page. And the person [who wrote that] is wrong, because, in the long run, Burton does benefit from this GoFundMe page, and he benefits from a great record when it comes out."

Asked if he has spoken to Burton directly about his decision to update the 2017 recordings and release them, Dino said: "No, I have not spoken to him. He's made it clear that he's distancing himself from FEAR FACTORY because he is working on [his] ASCENSION OF THE WATCHERS [project]. Now, I'm quoting him, and he's [told the] media and [gone] on record [as] saying that. We have tried to reach each other over the years, but we do not have exactly the perfect relationship. Usually when Burt's working on a project, he disappears and he focuses on that. That I know from 30 years of knowing him and being in the business with him — those things I know. And that's it. There hasn't been any communication between us two at all whatsoever — lately."

On the topic of the musical direction of the new FEAR FACTORY album, Dino said: "Right now, as of right now, it's got a very, very 'Genexus' vibe, the last record. But we do have some aggression on this record that comes from the 'Mechanize' [2010] era, but I would say a close second to 'Genexus'. It has the groove, it has all the amazing industrial elements that we've had over the years, new stuff. Again, we've got the production team back, and I'm very excited about that. We've got Mike Heller, who's been with us for the past seven years as our drummer. He slams on this record — he sounds amazing... I don't wanna give too much away, because it's not gonna come out till next year. But I can't wait for people to hear it. I can't wait to be on the road. I hope the world opens up. I hope we can get back on the road and start touring again. Those are my aspirations that I wanna see happen."

In a November 2018 interview, Bell said that FEAR FACTORY had completed a new album tentatively titled "Monolith". He also said that "legal technicalities" needed to be sorted out before the record could be released.