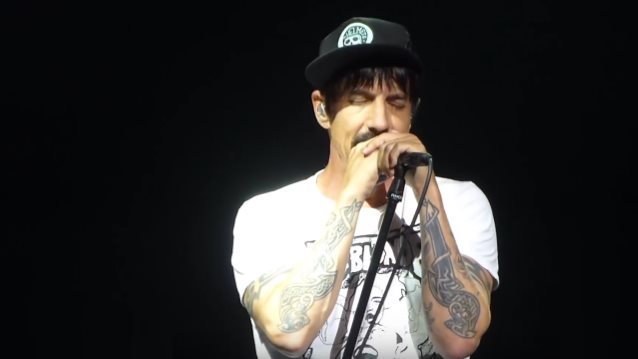 Fan-filmed video footage of RED HOT CHILI PEPPERS' entire January 7 performance at the Toyota Center in Houston, Texas can be seen below.

RED HOT CHILI PEPPERS kicked off their 2017 North American tour last Thursday (January 5) in San Antonio, Texas, launching their first proper trek on this continent in several years. The band is out in support of its eleventh studio album, "The Getaway", which arrived last June, and the opening night set featured all three singles from the disc — "Sick Love", "Dark Necessities" and "Go Robot" — along with "Goodbye Angels" and the title track.

The rest of the 17-song show was mostly filled out by CHILI PEPPERS standards such as "Can't Stop", "Dani California", "Otherside", "Breaking The Girl" and perennial evening closer "Give It Away".

Among the opening acts joining the CHILI PEPPERS on the tour are TROMBONE SHORTY, former drummer Jack Irons and Japanese teen trio BABYMETAL. CHILI PEPPERS bassist Flea told The Pulse Of Radio a while back that the band has a simple rule for choosing its opening acts. "We just want the best act we can get, you know," he said. "We never have a fear of being, you know, blown off the stage or anything, 'cause that's not gonna happen. That's just not gonna happen, you know."