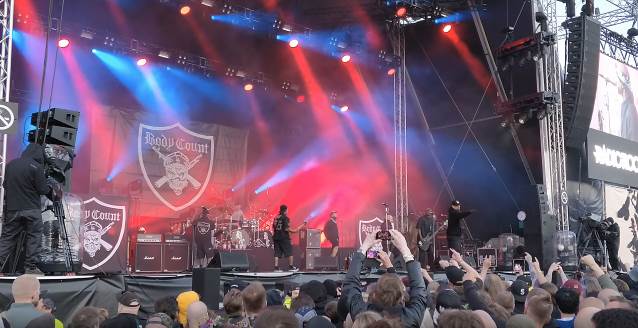 Former SLAYER drummer Dave Lombardo joined BODY COUNT on stage Friday (June 29) at the Tuska festival in Helsinki, Finland to perform the final section of the SLAYER medley "Raining Blood"/"Postmortem". Fan-filmed video footage of his appearance can be seen below.

Lombardo performed at Tuska earlier on Friday with DEAD CROSS, in which he is joined by Mike Patton (FAITH NO MORE), Justin Pearson (THE LOCUST, RETOX, HEAD WOUND CITY) and Michael Crain (RETOX, FESTIVAL OF DEAD DEER).

BODY COUNT's version of "Raining Blood"/"Postmortem" is featured on the band's latest album, "Bloodlust", which was released in March 2017. The follow-up to 2014's "Manslaughter" includes contributions from MEGADETH's Dave Mustaine, SOULFLY and CAVALERA CONSPIRACY's Max Cavalera and LAMB OF GOD's Randy Blythe.

BODY COUNT bassist Vincent Price spoke about how he approached recording "Raining Blood" in the studio. He said: "I got this phone call from Ice-T at the same time he told me about trying to find people to be on this record. He goes, 'Vince, I want to cover 'Raining Blood'. I'm thinking, 'Wait a minute, 'Raining Blood' starts with the end of 'Postmortem'. I was, like, 'You know what? Let's put a twist on it — start our 'Raining Blood' and then end with 'Postmortem', which I do vocals on."

Lombardo was effectively fired from SLAYER after sitting out the group's Australian tour in February/March 2013 due to a contract dispute with the other members of SLAYER. He has since been replaced by Paul Bostaph, who was previously SLAYER's drummer from 1992 until 2001 and recorded four albums with the band.

In our set we cover a Slayer song we had long time friend @davelombardo sit in today that was great!!! #bodycount #slayer #davelombardo