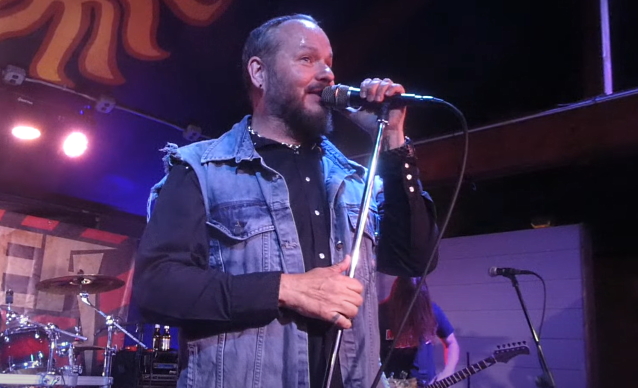 Owens joined PRIEST in 1996 after being discovered when the band's drummer, Scott Travis, was given a videotape of him performing with the PRIEST cover act BRITISH STEEL. JUDAS PRIEST at the time was seeking a replacement for Rob Halford. He recorded two studio albums with the band — 1997's "Jugulator" and 2001's "Demolition" — before PRIEST reunited with Halford in 2003.

Tim told Danny Stoakes that he still sometimes can't believe that he got to front his favorite band. "It is strange, 'cause you look at 'em totally different," he said. "You still kind of laugh about it and you think, 'Wow! This is crazy.' I started saying that years ago; it really is. They were my idols — Glenn [Tipton] and K.K. [Downing] and Rob. JUDAS PRIEST was the only band I had up in the posters when I was a kid in the '80s. Yeah, it's kind of just crazy that you become such family and friends. And that we really were — that's how I was treated. So you just look at 'em differently, like, 'Man, they were my idols.' And even Rob, because we became friends. And that's a good thing, for their point of view, because they treated me well and that's how it became. It wasn't like they acted any different."

Owens went on to say that touring with PRIEST was "great. We had so much fun and hung out a lot," he said. "It was a really good time. We did everything together."

In 2019, Owens told Ultimate Guitar that he believes his era of JUDAS PRIEST is largely overlooked. "Yeah, I think it definitely deserves more [attention]," he said. "I mean, they don't do anything. [Laughs] It's kind of amazing that they just totally erased it that they won't play... I mean, 'Burn In Hell' [off 'Jugulator'], the crowd would like to hear 'Burn In Hell'. They don't have to give me a tribute or anything, but it would be nice to play a song from... You know, that was a pretty big thing, I did two studio records, two live records, and a DVD, starting from '96 to 2004. So it's kind of crazy that it's just been erased and they won't even play a song from it live, because it is JUDAS PRIEST."

KK'S PRIEST will release its debut album, "Sermons Of The Sinner", on October 1 via Explorer1 Music Group/EX1 Records.