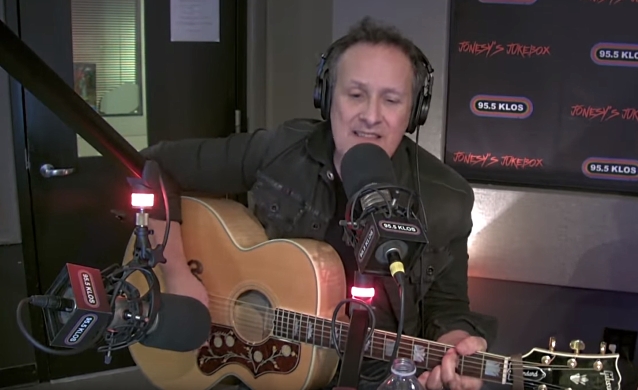 DEF LEPPARD guitarist Vivian Campbell performed an acoustic version of the band's song "Hysteria" during a recent appearance on SEX PISTOLS guitarist Steve Jones's radio show, "Jonesy's Jukebox", on the 95.5 KLOS station in Los Angeles. He was joined by his LAST IN LINE bandmate, bassist Phil Soussan, as they also played stripped down versions of "Rainbow In The Dark", "Don't Believe A Word" and "Whisky In The Jar". Check out video footage below.

DEF LEPPARD will be inducted into the Rock And Roll Hall Of Fame this month. The honor comes after the British rockers got the most votes in the Rock Hall's online fan poll.

One of the top-selling rock acts of of all time, DEF LEPPARD has been eligible for the Rock Hall since 2004.

The 2019 nominees had to release their first recording no later than 1993.

Asked in a recent interview with Penn Live how making music with DEF LEPPARD compares to other bands he has worked with, Vivian said: "A lot of other rock bands are just very traditional in their thinking in terms of the physical aspect of recording, that it has to be cut live. I kinda like that. It does add life to tracks. And sometimes DEF LEPPARD does do that. But most of the time we don't.

"Most bands would make an album of nine, ten, eleven, twelve songs. That's not the way that LEPPARD works. With DEF LEPPARD, there's a strong sense of the concept for an album. In many cases, before any songs are even written, we discuss the kind of album we'd like to make, and kind of write to order. We'll spend days, weeks working on a track, and then have a change of hard and scrap it. It'll go on the shelf, maybe to be resuscitated down the line, or maybe never to see the light of day.

"With LEPPARD, it's a very deliberative process, and it begins with conceptualizing what kind of song we want to write, and what album we want to present. So, at times, I'll admit it can be a frustrating process as the new guy, but I 100 percent understand why they do it. It works for DEF LEPPARD. It wouldn't work for anyone else, I don't think."