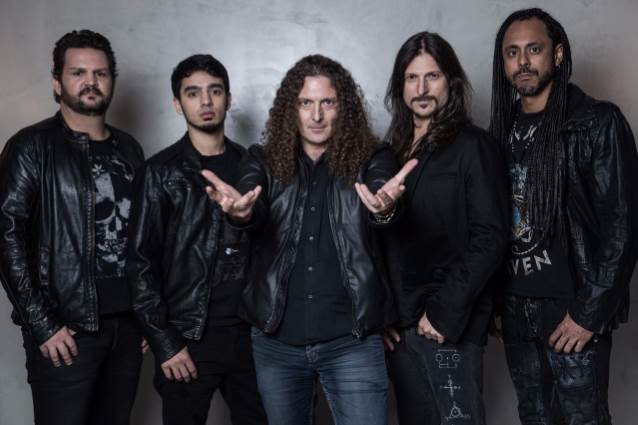 Brazilian/Italian metallers ANGRA have released a music video for their song "Black Widow's Web", taken from the band's latest album, "Ømni". The clip features the special participation of the singers Sandy and Alissa White-Gluz (ARCH ENEMY) and was directed by Leo Liberti of Libertà Films Group, who also worked on MEGADETH's "Lying In State" clip.

"Black Widow's Web" talks about loneliness and what it does to people. Among the main subjects are teen suicide, couples who do not look at each other, pedophilia, social media and the Internet, video games, drugs, that is, everything is a refuge. "In every refuge, there is always a hidden demon that wants to get you in some way, whether brutal or not," said Liberti.

He added: "Age does not matter! I see myself all the time using 'Pepa Pig' to help my son to be quiet and eat his food. And he's involved in the video just by doing that. We are all immersed in this huge network. Surely everyone should be reading this note because it's on the network! There is no escape."

Sandy is deeply admired by Liberti and ANGRA guitarist/vocalist Rafael Bittencourt. "Working with Sandy was a gift," said Rafael. "I feel privileged to have the respect of an artist such as her. She was practically born on a stage, so it was a learning experience to watch closely the performance of this beloved Brazilian diva. She has an intimate relation with the lights and a performance that’s worthy of the great icons of world music, not mentioning her tuning and impeccable technical preparation. I just have to thank the universe for giving me such an opportunity."

Liberti added: "When I started writing the screenplay, I really wanted Sandy not to just come out as a 'singer of one verse.'" He wanted her to be the personification of the black widow's archetype. The seemingly sweet and seductive web that leads you to death. And as a true rocker who listens to everything from THE BEATLES to SLIPKNOT, he only knew that Sandy was the daughter of "Chitãozinho and Xororó" and that she had recorded a version of a song by ROUPA NOVA. "In short, Sandy means rock too, in the most primitive sense of the word," Leo said. "She let me write the script the way I wanted, and she's much more concerned with art than with picture. It's not every singer who, without questioning, goes into a tub of blood under a cross, with four candles next to her in a church."

In addition to the whole history of music, the music video features such unusual scenes of Sandy in a tub filled with fake blood and the participation of White-Gluz, which was recorded directly from Canada, her native land.

Currently featuring Fabio Lione (vocals), Rafael Bittencourt (guitar), Marcelo Barbosa (guitar), Felipe Andreoli (bass) and Bruno Valverde (drums), ANGRA is excited about its new phase and the release of this music video. The band is presenting the album "Ømni" all over the planet, with 97 confirmed dates so far.

ANGRA will film a new DVD on July 21 at Tom Brasil in São Paulo. At this show, the musicians will fully present the album "Ømni" with the participation of Sandy, along with several other songs chosen by fans by request.