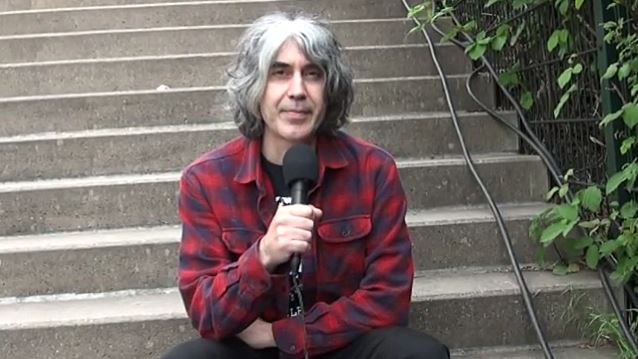 In a new interview with music writer Joel Gausten, VOIVOD drummer Michel "Away" Langevin discusses a number of topics, including the band's upcoming "Post Society" EP, the departure of bassist Jean-Yves "Blacky" Thériault and the key to the group's longevity. An excerpt from the chat follows below.

JoelGausten.com: One of the highlights of "Post Society" for me is your cover of "Silver Machine", which I know was recorded and announced before Lemmy's passing. Obviously, you guys toured with MOTÖRHEAD, and you covered MOTÖRHEAD in the early days. What was that band's greatest impact on you as a musician?

Away: It's definitely the band that had the most impact on VOIVOD. We were fans of DISCHARGE and VENOM and all that, but MOTÖRHEAD was really the focus of VOIVOD in the sense that I totally copied "Philthy Animal" Taylor, and Snake's vocals are really influenced by Lemmy's vocals. Of course, Piggy was a huge fan of "Fast" Eddie; actually, Piggy's first nickname was "Fast Piggy." [Laughs] MOTÖRHEAD was really the example for us. It was just heavier than everything, especially at the end of the '70s and very early '80s. It was the basis for everyone who wanted to be heavy. All of a sudden, everyone wanted to be heavier than MOTÖRHEAD, then all of a sudden, everybody wanted to be heavier than SLAYER and so on and so on. It turned into blastbeats! [Laughs]

JoelGausten.com: How were you first introduced to HAWKWIND?

Away: Again, this is all stuff that Piggy was aware of in the '70s. We were two or three years younger than him, and he really introduced us to weird progressive rock and German Krautrock and all that. HAWKWIND has definitely always been one of my favorites, along with GONG. When we did the last sessions for the new EP, we heard a lot about cancelations of shows on the MOTÖRHEAD 40th-anniversary tour. We started to worry about Lemmy. While in the studio, we decided to do "Silver Machine". We did it really quick; we learned it in the studio, winged it and tried our best. But it was definitely to pay homage to Lemmy. Of course, we were not expecting him to pass away; we just felt it was time to pay tribute to him.

Read the entire interview at JoelGausten.com.