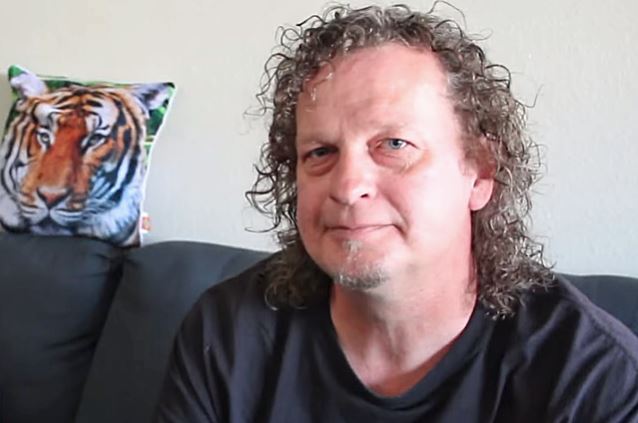 VOIVOD singer Denis "Snake" Bélanger says that he and his bandmates feel "extremely lucky" to still be able to record music and tour the world, more than a decade after the tragic death of their founding guitarist Denis "Piggy" D'Amour.

When D'Amour died in 2005 from cancer, it seemed VOIVOD was very much a memory. Then that summer the Canadian metal innovators surprised most by coming out of retirement to play the first Heavy MTL festival with a new-old lineup: original member Jean-Yves Thériault (a.k.a. Blacky) was back behind his blower bass and MARTYR's Daniel "Chewy" Mongrain was playing guitar.

At first what was assumed would only be a one-off soon grew to become a return to live action for the band. The next summer saw the band play almost every European metal fest and support DOWN on a cross-Canada tour and things just kept building from there. The metal world soon discovered that if there was one guitarist who could replace Piggy properly it was Mongrain, who proved show after show that he was up for the job.

"We keep doing it in order to honor him somehow," Snake tells "The Very Manic Jimmy Cabbs Show" (see video below). "'Cause after when he died, we were so devastated and we had to do something. We took some time off, and finally, after a few years, we met this guy Chewy who was, like, the best person to kind of fill up these shoes. 'Cause he was a VOIVOD fan; he started to listen to VOIVOD at 12, 13 years old when he saw our show in his hometown and he picked up a guitar and started to learn Piggy's stuff. And so it's like putting a seed on the ground and letting it grow. So a tree falls and then there's another tree."

According to Snake, Piggy's unique playing approach and one-of-a-kind technique and sound was largely responsible for the band's early success, with the guitarist's influence continuing to transcend musical genres more than three decades into VOIVOD's career.

"[Piggy] had these three-tone guitar chords; only him could do that sort of thing," he said. "And so it brought something different in the metal scene, I guess, because nowadays I'm hearing stuff. Sometimes even stuff that is more commercial, like let's say FOO FIGHTERS, I can hear the tone of Piggy somehow. So I think Piggy brought something different to the metal scene, that's for sure."

2013's "Target Earth", VOIVOD's first album of new material written without Piggy's left-over riffs, was almost universally hailed it as a triumphant return to form, a return to the "classic" VOIVOD sound, and the best thing they'd done in years. A five-song EP, "Post Society", followed earlier this year, with plans for another full-length effort to arrive sometime in 2017.

"We feel extremely lucky to keep doing what we do, and it's to honor Piggy," Snake reiterated. "Because we love what we're doing. Obviously, we have the chance to still do it, and so we keep going."