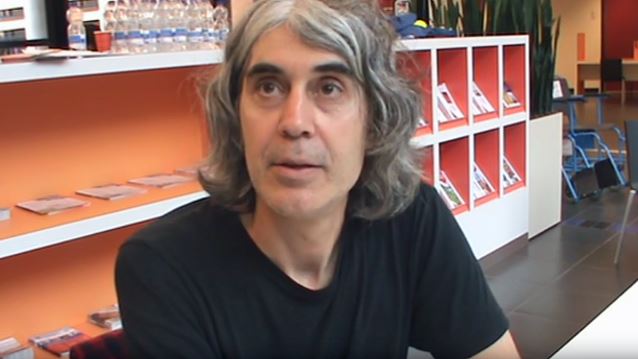 FOK! recently conducted an interview with drummer Michel "Away" Langevin of Canadian progressive sci-fi metal innovators VOIVOD. You can now watch the chat below.

Speaking about the band's latest release, the "Post Society" EP, Away said: "It does have ingredients from '80s and '90s and the Jason [Newsted, former VOIVOD bassist] years, but with a new twist. It's where we're heading for. And the reviews were really positive, so it's encouraging for us. So we are writing a concept album right now — like, ten new songs — for Century Media."

Away also outlined VOIVOD's plans for the coming months, saying: "We're coming back [to] Europe in October and November with ENTOMBED A.D. And then we're gonna work on the new album and try to deliver it to Century Media early next year. And then we have a busy schedule as well in terms of touring. We write on the road and record between tours, so it's like a machine, a factory. No choice. [Laughs]"

Asked if VOIVOD waits until the songs are fully worked out before entering the studio to record them, Away said: "Yeah. Nowadays we try to record three or four songs at a time and then go on the road and then write more on the road. We set up a small studio in the van or in the bus with a laptop. So we record a bunch of songs and put them together, but next album, since it's a concept album, we might have to record the whole thing all together to make it solid."

VOIVOD's will team up with ENTOMBED A.D. for a limited-edition split seven-inch EP, featuring the VOIVOD track "Fall" off the "Post Society" EP, which is so far unreleased on vinyl. The release will coincide with the start of the two bands' tour on October 28.

2013's "Target Earth", VOIVOD's first album of new material written without Piggy's left-over riffs, was almost universally hailed it as a triumphant return to form, a return to the "classic" VOIVOD sound, and the best thing they'd done in years.