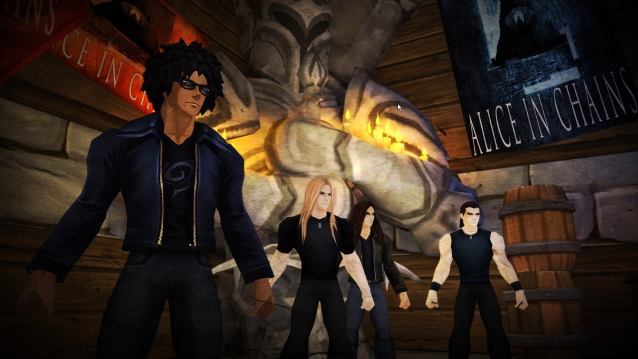 A virtual version of ALICE IN CHAINS will perform in the multiplayer video games AdventureQuest 3D and AQWorlds. The band will play on stage as part of a special in-game event.

For three weeks only, the massively multiplayer musical event will be taking place. The games are free to get and the battle concert is free for all players to enjoy. Non-stop shows will run continuously from November 7 to November 30 inside the games. When this limited-time event ends, it is gone forever.

"Rainier Fog" marked a few firsts for ALICE IN CHAINS: it was the band's first album for BMG and their first time recording in their hometown of Seattle in more than 20 years (worth noting that the album title is a tribute to Seattle). The "Rainier Fog" recording process also saw the band spend time at Henson Recording Studios in Los Angeles and at the Nashville studio of producer Nick Raskulinecz. "Rainier Fog" was the third straight ALICE IN CHAINS album recorded with Raskulinecz and engineer Paul Figueroa. The album was mixed by Joe Barresi (QUEENS OF THE STONE AGE, TOOL).