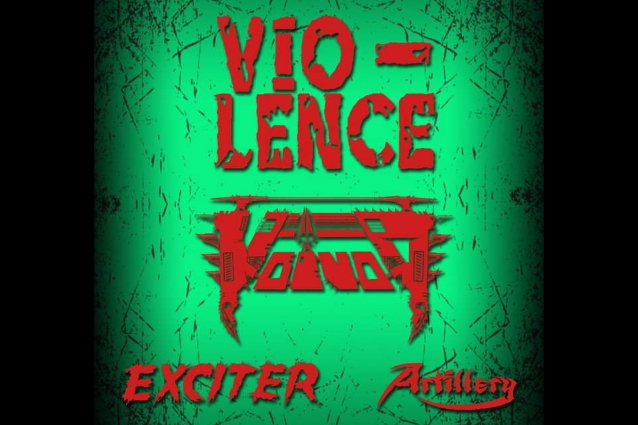 The trek is currently scheduled to kick off on November 24 in Amersfoort, Netherlands and conclude on December 6 in Gothenburg, Sweden.

So far, the following dates have been announced:

VIO-LENCE will release a new EP, "Let The World Burn", in early 2022 via Metal Blade Records. The effort was recorded at Trident Studios in Pacheco, California with producer Juan Urteaga, who has previously worked with TESTAMENT, MACHINE HEAD and EXODUS, among many others. Mixing duties were handled by Tue Madsen.

VOIVOD released a new live album, "Lost Machine - Live", in November via Century Media Records. The disc was recorded in Québec City during the worldwide touring cycle for 2018's "The Wake".

Last summer, VOIVOD released a new three-track 12-inch vinyl and digital EP titled "The End Of Dormancy" via Century Media Records. The EP is centered around a special "Metal Section" version of the title track (off "The Wake") with added trumpets, saxophone and trombones. The complementary songs on this release are exclusive live versions of "The End Of Dormancy (Metal Section)" and the group's classic "The Unknown Knows", recorded at Montreal Jazz Fest 2019.

"The Wake" was released in September 2018 via Century Media Records. The disc was recorded and mixed by Francis Perron. The album's artwork was once again created by drummer Michel "Away" Langevin.

EXCITER is currently writing and demoing material for its long-awaited comeback album. The LP will mark the Canadian thrash metal veterans' first since the departure of guitarist John Ricci and addition of Daniel Dekay, who has played with DIEMONDS.

Ricci, Beehler and Johnson reunited as EXCITER in 2014 and had been playing sporadic shows until John's latest exit from the group.