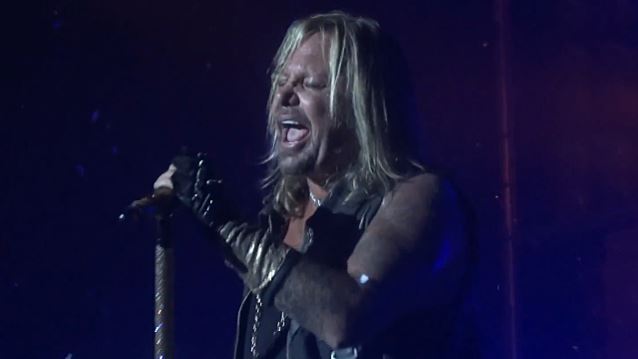 Vince Neil, lead singer of the iconic rock band MÖTLEY CRÜE, has announced that he will perform the National Anthem at the Las Vegas Outlaws' first game (vs. the San Jose SaberCats) on Monday, March 30 live at the Thomas & Mack Center. Neil will sing "The Star Spangled Banner" just before kick-off, which takes place at 7:30 p.m. PT. Doors to the public open at 6:30 p.m. PT.

"I'm going to perform the National Anthem in honor of the Outlaws' first game, for the fans and families in attendance, and for our veterans and service men and women everywhere," said Neil. "The players and coaches are ready to get this season rockin' and to make Las Vegas proud of its awesome Arena Football team."

Neil has been the lead singer of MÖTLEY CRÜE since 1981 and has enjoyed more than three decades in the music and entertainment business. Over the years, he engaged in other successful business ventures, including taking an ownership stake in the Jacksonville Sharks Arena Football team, and as of late last year, the Las Vegas Outlaws AFL expansion team. Neil will be in attendance at the Outlaws' historic first game during his break from MÖTLEY CRÜE's "The Final Tour".

In September 2014, it was announced that Neil would bring Arena Football back to Las Vegas. Since then, the Outlaws have been building its coaches and players roster, securing national television deals and pursuing local business sponsors including Dollar Loan Center. The team is actively seeking additional sponsors as a result of sports giant ESPN and CBS Sports signing on for television and online broadcasts.

In its inaugural game, the Outlaws are facing a tough opponent from San Jose. With over 18 seasons of play, the SaberCats are considered one of the Arena Football League's most successful franchises. The SaberCats have a lifetime regular season record of 181–96 (winning 65% of games played). They are the 2014 Pacific Division National Champions. Their postseason record currently stands at 15–11.