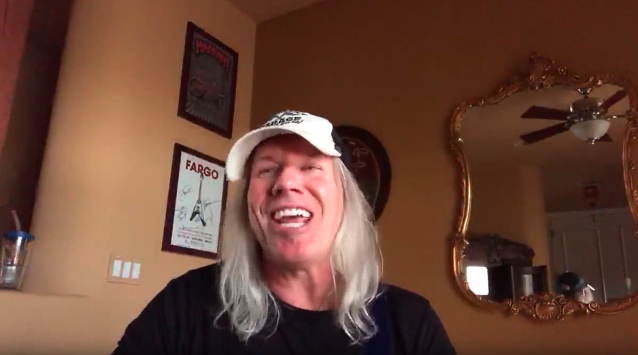 WARRANT has uploaded video of singer Robert Mason performing an acoustic version of the band's song "U In My Life".

In a statement accompanying the clip's YouTube release, WARRANT wrote: "Our very own rock n roll quarantine brother, Robert Mason playing a song for y'all... from a safe social distance ! U in My Life from our LouderHarderFaster.com CD. Screaming and streaming everywhere they play kick ass music. Stay Home, Safe and Healthy ! We are #flatteningthecurve"

Mason replaced original WARRANT frontman Jani Lane in 2008 and has brought a degree of stability to the band after Lane's unceremonious departure and subsequent 2011 death.

Asked in an interview with "Thorn Of Rock" how he came to sing for WARRANT, Mason said: "It fell together very organically. When we saw each other, it was kind of one of those 'aha' moments. Like, 'Oh! Hey.' I hadn't seen the guys in a couple of years. Lane and I had stayed in touch, off and on, through the years. But everybody kind of goes their separate ways and does their own thing.

"Lane was in a very dark place, and I honestly couldn't reach him and neither could anybody else, to help him," he continued. "And they quickly realized, once they all got back together in '07 to do those original-lineup shows… 'Cause the band had been through a couple of changes — people left and came back; that sort of thing — but when it was all five original guys, I had championed that cause, really, and I had talked to a couple of them, via either text message or phone, about it. And then I bumped into them at Rocklahoma in, I guess, July of '08, and it was pretty clear to see that Jani wasn't doing well on the road. And as talented a guy as he was, it was to his detriment and the band's that he was doing those shows and just not really being able to keep it together. And I felt badly for everybody involved. And I know that they thought it was the smartest thing for his health to not be a touring member of WARRANT. And that's a rough thing, man. That's the elephant in the room. I've talked about it a lot in interviews.

"From the band's perspective, I saw four out of five guys that were kind of down in the dumps but really wanted to make it work," Mason added. "And when we bumped into each other, we had that little epiphany moment, like, 'Wow!' And Joey Allen [guitar] came to me and he [said], 'Hey, man, would you ever consider singing for us, or do you wanna at least talk about it?' I think Joey and I talked about it first, as I remember. Like I said, when they had to make that decision, it was not an easy one."

Asked if he always feels like he has something to prove to the fans whenever he steps on stage with WARRANT, Mason said: "I don't know. I kind of feel that way every time I walk up on stage at all. You have an obligation to do a good job, but it's mixed with wanting to satisfy yourself, plus a sense of personal pride. Plus I just love what I do. I'm my happiest ever, I think, I've come to realize, when I'm on my side of the microphone and everybody else is on the other side. If I have a willing audience that's willing to like what I do, have fun, and I can kind of be the shiny hood ornament on the car, that just makes me personally drive to work harder and do better. So, I guess so.

"Like I said, it's the elephant in the room," he continued. "Obviously, it's four out of five original guys, plus me. And I understand that there's a huge amount of nostalgia based in those songs with Jani as the singer and the frontman of the band. He was amazingly great at it — he was a great frontman, a great singer, a talented songwriter. So, yeah, I feel the obligation, I guess, but I don't look at it like a burden. It's almost like a fun challenge. Plus, we've had fans totally embrace this now. It's very rare that I get anything other than encouragement and acceptance."