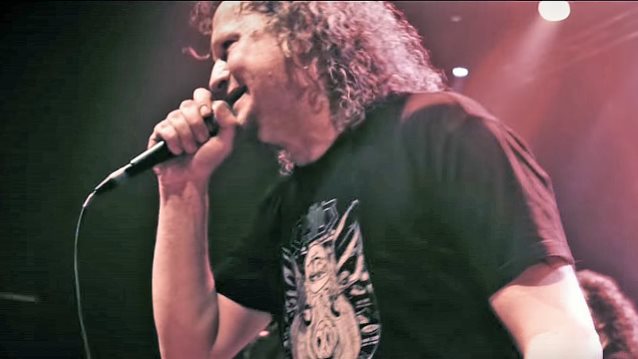 After completing a comprehensive European tour with Century Media Records labelmates ENTOMBED A.D., Canadian progressive sci-fi metal innovators VOIVOD are wrapping up a busy year of promoting their "Post Society" EP, and are now launching a promotional video clip for its title track.

The clip, which was shot by Dirk Behlau of the Beastwood Film Production (SPIRITUAL BEGGARS, DARK TRANQUILLITY, ARCH ENEMY) during VOIVOD's appearance at the Leafmeal festival in Germany, can be seen below.

While continuing work on VOIVOD's upcoming studio album, drummer Michel "Away" Langevin checked in with a comment about the "Post Society" video and looked back on the band's very successful 2016.

"This video is the best ending of a very productive and crazy year!" he said. "It started in February-March with a North American East Coast tour with VEKTOR, EIGHT BELLS and BLACK FAST. Then the West Coast and across Canada in May-June with CHILD BITE and KING PARROT. We were joined by Jason Newsted in San Francisco for a two-basses rendition of the song 'Voivod'.

"Shortly after getting back home, we drove down to Montebello, Quebec, to perform at the ever-growing Amnesia Rockfest, where I watched a very tight and energetic show by our friends D.R.I.

"In July, we flew to the Hell And Heaven Fest in Mexico City, where we shared the stage with SEPULTURA and witnessed an intense performance by SUICIDAL TENDENCIES with Dave Lombardo on drums! My highlight was watching TWISTED SISTER in the middle of tens of thousands of people singing 'We're Not Gonna Take It'. We also visited the pyramids of Teotihuacan.

"In August, it was time to go to Europe for a few festivals and club shows. We got a great crowd reaction at Into The Grave festival in The Netherlands, where we ran into our old pals CARCASS.

"In October, we flew to St. John's in the Canadian Maritimes to play our first show ever in Newfoundland. The next day we played the Halifax Pop Explosion in Nova Scotia, came back home right on time to repack and flew to Europe again for a fun tour with ENTOMBED A.D.! We made a stop at the Leafmeal festival in Dortmund, Germany, where we shot the 'Post Society' video with Dirk Behlau / Beastwood Film Production.

"We wrote some songs on the road, demoed them between tours, and now we will spend the winter writing some more, just to make sure there will be a brand new VOIVOD album in 2017.

"Thanks for coming to the shows.

"Enjoy the video, which is very representative of the good time we have on stage, and see you next year!"