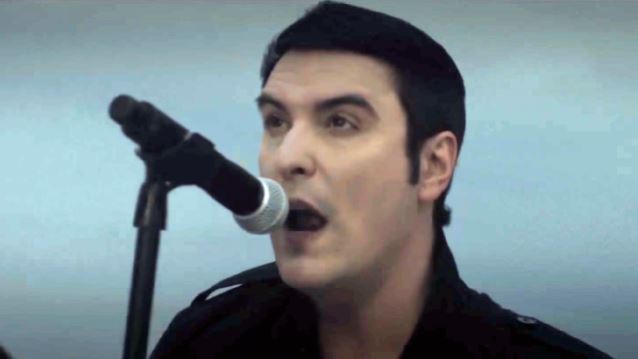 BREAKING BENJAMIN's video for the song "Angels Fall" can be seen below. The track is taken from the band's latest effort, "Dark Before Dawn", which sold 141,000 copies in its first week of release to enter The Billboard 200 chart at position No. 1. The sales number was the best single-week sales mark of the band's career, with 135,000 of those made for physical CDs.

"Dark Before Dawn" features original frontman Ben Burnley leading an all-new lineup of the group, which has been expanded from a quartet to a five-piece.

Burnley fired two earlier members in 2010 over a legal battle, while a third member departed in 2013.

Burnley also struggled with a mysterious illness during the band's six-year hiatus, which he told The Pulse Of Radio might be the result of the excessive drinking he used to do. "I used to drink a lot, and I think it must have something to do with that because back in 2007, I stayed up drinking for three days straight — this is after already months and months of drinking heavily — and I woke up and I just felt really sick, like alcohol poisoned, and I was like, I should've probably gone to the hospital but I didn't, and I went onstage and when I went onstage I almost collapsed from being just so sick. And basically that was 2007 and it hasn't gone away."