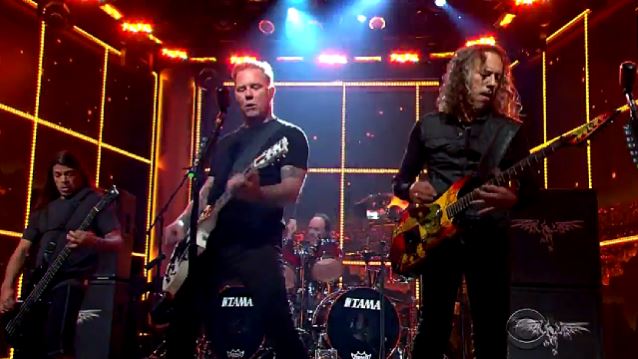 METALLICA performed the song "Fuel" on the second night of the band's week-long residency as the musical guests on CBS-TV's "The Late Late Show With Craig Ferguson". Check out video footage of the band's appearance below.

On Monday, METALLICA kicked off its "Ferguson" residency with a performance of "Hit The Lights", the opening track to its 1983 debut album, "Kill 'Em All". Lars Ulrich and James Hetfield also sat down with Ferguson for an interview.

The band said in a statement, "We're excited to celebrate Craig Ferguson's final season on CBS as he has asked us to join him for an entire week of performances starting Monday, November 17th. We'll be playing every night that week and on the first night (Monday) we'll sit down with Craig to chat about all things 'TALLLICA."

Ferguson announced his exit from the program in April, shortly after he was passed over to replace David Letterman, who also revealed that he would retire next year.

METALLICA is reportedly getting back to work this fall on its 10th studio album, due out sometime in 2015.

METALLICA will release a limited 12-inch vinyl single of the new song "The Lords Of Summer" on Record Store Day Black Friday, November 28.

The single will feature the "first pass" studio version of the song as well as a live take recorded in Rome in July. This collectable vinyl will only be available through independent record stores and Metallica.com.