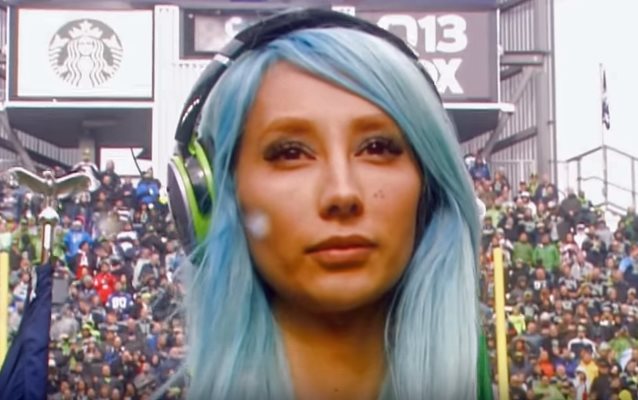 GUNS N' ROSES keyboardist Melissa Reese sang the national anthem prior to the Seattle Seahawks' October 16 game versus the Atlanta Falcons at CenturyLink Field in Seattle, Washington. Check out video footage of her performance below.

A Seattle native, Reese made her live debut with GUNS N' ROSES on April 1 at the band's warm-up show at The Troubadour in West Hollywood, California. Her connection with GUNS N' ROSES reportedly comes via Bryan "Brain" Mantia, who drummed with the group from 2000 until 2006. The two have collaborated extensively, composing music for video games, commercials and the score for the horror film "Detention". They've also performed on "Best Regards", the five-CD set by another former GUNS N' ROSES member, Buckethead, and its follow-up, "Kind Regards".

GUNS N' ROSES' summer North American stadium tour grossed a massive $116.8 million with over one million tickets sold. The band grossed an additional $15 million earlier in the spring from two shows in Las Vegas and another pair at Coachella.