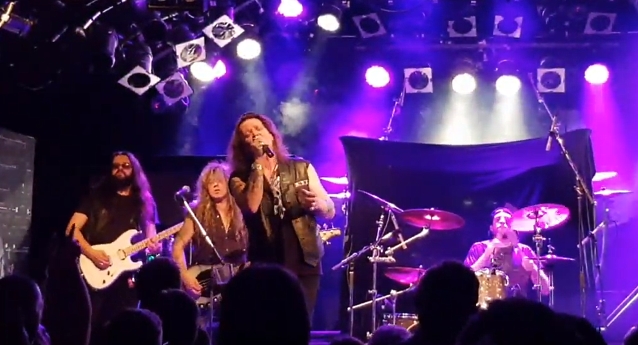 Fan-filmed video footage of former ACCEPT singer David Reece performing the band's song "Generation Clash" live on March 13 at KB in Malmö, Sweden can be seen below. Headlining the concert was U.D.O., the German metal act fronted by another ex-ACCEPT singer, Udo Dirkschneider.

Reece recently said that he doesn't believe his former bandmates were "thoroughly prepared" to replace Dirkschneider at the height of the group's success three decades ago.

The current SAINTED SINNERS vocalist was recruited by ACCEPT for the "Eat The Heat" album in 1989 following the departure of Dirkschneider. Reece's higher-pitched delivery was in sharp contrast to Udo's distinctive style, and overall, the album was a critical and commercial disappointment. Midway through the "Eat The Heat" tour, differences between the band and Reece had come to a head, leading to the altercation between the singer and bassist Peter Baltes in Chicago. By the end of 1989, ACCEPT had hung it up.

Reece, who has also played with BONFIRE and BANGALORE CHOIR, told "The Classic Metal Show" in a new interview that he thinks external influences were responsible for the ACCEPT singer change that resulted in him landing the gig.

"I've thought about this, of course, my whole life," he said. "That was 30 years ago. And I don't think ACCEPT were thoroughly prepared to make that choice. They were being pulled by the ring in their nose by the labels in America. 'This band is set up huge in Europe. Let's cross over the pond and really break this thing.' So they were, like, 'Yeah, we wanna be more famous and richer.' I don't really think they considered how big Udo really was. Now, you've got [current ACCEPT singer] Mark Tornillo. He's a soundalike — I mean, he's an Udo copy — and that sound works inside that German thing. But I never really heard them admit that they were prepared for what they really did, and they blamed me for a lot of things."

Reece also expressed his disappointment over the fact that the members of ACCEPT have never properly acknowledged "Eat The Heat" as the quality album that it really is.

"Why can't they just say, 'Hey, it's part of our legacy'?" David asked rhetorically. "I've heard Wolf [Hoffmann, ACCEPT guitarist] going as far as [telling journalists], 'Don't ask me about David Reece in interviews. Don't bring up that part of my history.' You know what, pal? I've got a couple of stinker albums in my collection in my life too. It gives a story. It's a story to talk about. You don't have to badmouth each other. You can say, 'It just didn't work. It was a great experience.' 'Cause I think Wolf Hoffmann actually got to play some pretty impressive guitar stuff ['Eat The Heat']… On that album, you get some David Gilmour tones with 'Generation Clash'. He's one of the greatest metal guitar players in the world, but he got to show that he can actually play. And I give him credit for it."

Back in 2017, Reece told Canadian rock journalist Mitch Lafon that he still looks back fondly on the "Eat The Heat" album. "You know what? It's weird, because the bad blood happened at the end of it, and I hated it — I hated everything about it," he said. "I knew it opened a bunch of doors for me, but… I, on a daily basis, get people telling me what that album means to them now. At the beginning, they hated me, but now it's, like, they have this rebirth of how great it is. And I listened to it the other day, and I went, 'That's a pretty dang good album for a first.'"