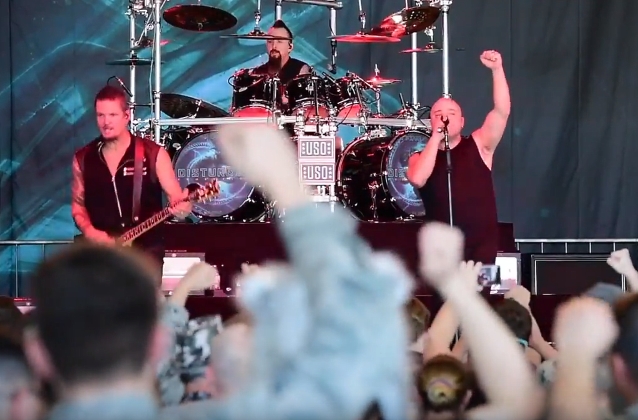 The USO brought heavy metal band DISTURBED to Creech Air Force Base, Nevada to meet the airmen behind the Remotely Piloted Aircraft (RPA) mission and perform the base's first-ever concert on October 23.

"The music is meant to empower," said DISTURBED singer David Draiman. "It's meant to strengthen people; it's meant to strip away fear and to give you the gumption you need to triumph over adversity."

Each band member also had the opportunity to fly training missions with the 432nd Operations Support Squadron's MQ-9 Reaper flight simulator, both as sensor operators and pilots. With simulator experience in the books, DISTURBED met with airmen for lunch and a meet-and-greet event where airmen took photos with the band and brought in personal items for signing.

"It was amazing! DISTURBED was actually one of the first bands I listened to when I was six and I was hooked ever since," said Senior Airman Tanner, a 12th Air Force Persistent Attack and Reconnaissance Center weather forecaster. "It feels great that a big band like DISTURBED took notice of what we do here at Creech and they think it's important to show support."

Later, DISTURBED performed a concert in a maintenance hangar and the band dove into its performance with classics and songs from its brand new album, "Evolution".

The next day, the band visited nearby Nellis Air Force Base, participating in a military working dog demonstration and getting an up-close look at military aircraft on base. After visiting various units, DISTURBED performed a second show for airmen and their families.

"I think that this is an incredibly important part of our Armed Forces," Draiman said. "What you guys do is an amazing thing, it keeps our troops on the ground safe and is a very integral part of the machine."

Check out a video report below.

A North American headlining tour in support of the disc kicked off January 9 in San Diego, California.

The trek will make stops in cities like Denver, Houston, Nashville, New York, Pittsburgh, and Toronto before wrapping up in Rosemont, Illinois on March 8. Support on the 27-city jaunt is coming from Canada's THREE DAYS GRACE.

Following the U.S. leg of the tour, DISTURBED will travel overseas to play in Spain, Czech Republic, Italy, and more countries throughout Europe. Their last slated show, as of right now, is on July 2 in Israel.