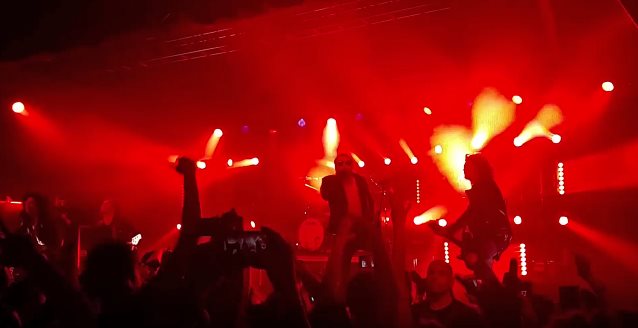 ASKING ALEXANDRIA played its first show with singer Danny Worsnop back in the band last night (October 25) at Seattle, Washington's Showbox SoDo. Fan-filmed video footage of the concert can be seen below.

The reunion was confirmed this past weekend, following weeks of rumors and speculation regarding the status of his replacement, Denis Shaforostov, who had joined the band in 2015.

ASKING ALEXANDRIA guitarist Ben Bruce said in a video message that Shaforostov had "just stopped talking to us." But the singer later tweeted: "I left AA because I can't be in a touring band at this point in my life. There's no drama and I don't want to be a part of it."

Worsnop said about his decision to reunite with his old band: "It was a long week pondering the decision and figuring out what the right thing to do was. After all, my solo album, 'The Long Road Home', is about to release, which is, of course, my primary focus. I'm also working on the new WE ARE HARLOT record, and trying to book in as much acting work as possible."

"I’m now in a place mentally where this is something I can embrace again, with the men I started this crazy journey with. It's a beautiful nostalgia that feels like nothing ever changed.

"All I can speak to is my excitement to be working with my old and dear friends, playing music we made for a decade that we are here to celebrate."

10 Years in the Black setlist! pic.twitter.com/dDB6kaFDQR