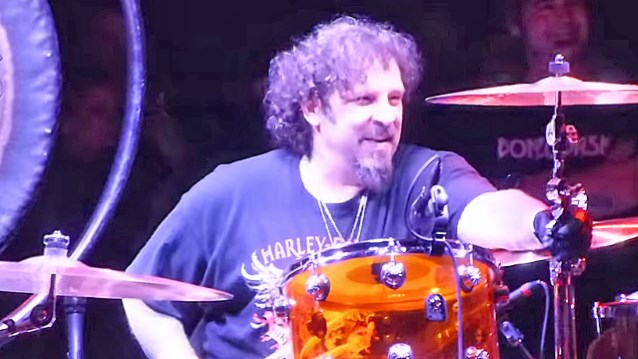 TWISTED SISTER drummer A.J. Pero has died at the age of 55.

According to the Associated Press, Pero was on tour with the band ADRENALINE MOB when members of that group were unable to rouse him on their bus Friday morning. He was taken to a hospital in Poughkeepsie, New York, where he died of an apparent heart attack.

"The band, crew and most importantly the family of A.J. Pero thank you for your thoughts and prayers at this time."

TWISTED SISTER singer Dee Snider released a separate statement, saying: "Today I lost a brother. Anthony Jude Pero passed away. A.J. was the final piece in a band that would become an international sensation and one of the greatest live rock acts to ever hit the stage. His sledgehammer assault on the drums helped drive TWISTED SISTER and me to greatness and inspired me to rock every single show. My heart breaks knowing I will never feel the power of his beat behind me, or turn to see his face smiling broadly from the sheer joy he got from doing what he loved. I will always remember that smile. RIP my friend."

Said TWISTED SISTER guitarist Jay Jay French: "A.J. Pero was a force, the likes of which I doubt I will ever have the chance to play in front of again. His drumming was legendary but his heart, as a human being, was even greater. This April 1st would have been his 32nd year as a member. In the TWISTED SISTER world, he was always affectionately known as 'the new guy.' That is how long and deep our history was/is. In our hearts, he will always be the engine that drove the train. I loved him and today my heart has been ripped out. RIP."

TWISTED SISTER bassist Mark "The Animal" Mendoza commented: "This morning I received the tragic news about A.J.'s passing. As anyone would be, I am devastated. With such a loss, even I broke down and cried, allegedly the tough guy in the band. One statement says it all, 'A.J. was my bandmate, my friend and my brother and I will miss him forever.'"

Said TWISTED SISTER guitarist Eddie Ojeda: "My family, extended TWISTED SISTER family, and I are heartbroken and devastated to hear the news of Anthony Jude Pero's passing. A.J. was a dear friend and brother to me, and, in my opinion, one of the most talented drummers of all time. I will always remember the amazing experiences and great laughs we shared. A.J. always had an amazing sense of humor and did his best to please everyone he came in contact with. Back in the day, when the band first started touring, we were often roommates and he never failed to keep me smiling.

"It's very difficult for me to talk about this right now. However, I feel that out of respect for his legacy, it's important for us to let the world know how we all felt and will always feel about him. I know I will dearly miss him, but I'm grateful to have been his friend and musical partner for thirty-eight years.

"At this time, my sincerest sympathies go out to his family. Heaven just got a great drummer, one that will live forever in our hearts."

Pero was a member of TWISTED SISTER from 1982 to 1986, from 1997 to 1998, and again from 2003 until his death. Pero performed on ADRENALINE MOB's last two albums and recently joined FOUR BY FATE, also featuring former FREHLEY'S COMET members Tod Howarth and John Regan.

ADRENALINE MOB said in a statement: "We write this with tears in our eyes and our hearts broken to pieces.

"Our beloved brother A.J. Pero peacefully passed away in his sleep this morning on the bus.

"We are in complete shock and our hearts and prayers go out to his family.

"It has been nothing short of an honor to have shared the stage with such a beautiful soul and legend!

"We will cherish this last picture [see below] we all took together on tour forever! What a great night we had... We'll miss you, buddy!"

ADRENALINE MOB guitarist Mike Orlando said: "Here it goes... Not sure how to make sense of this, but one of my dearest friends for almost 20 years passed away this morning while we we're on tour. He passed away peacefully in his sleep on the bus. A.J. Pero was one of the kindest, most caring and giving souls I've ever known! I have shared the stage with him on and off for almost two decades. It was nothing short of a true honor to not only have called him my bandmate, but one of my dearest friends! I will never forget you, buddy. I love you, brother! Rest in peace, my dear friend. You are a true legend!!!!"

Said former PANTERA and current HELLYEAH drummer Vinnie Paul Abbott: "We [in HELLYEAH] are very saddened and shocked to hear of the passing of our brother A.J. We had the pleasure of touring together last year and A.J. was the real deal!!! Big-hearted and kicked ass!!! He loved what he was doin'!! You will be missed, brother!!!"

QUIET RIOT drummer Frankie Banali said: "I am in total disbelief and saddened that my friend A.J. Pero has passed this morning. A.J. was such a wonderful person and a gifted drummer. I will miss him, our chats about all things New York and his energy. My condolences to the Pero family and the TWISTED SISTER family. Rest in peace, A.J."

Said BIOHAZARD drummer Danny Schuler: "RIP A.J. Pero. Devastated to hear about this today. Huge loss for anyone who knew him. When I was a kid growing up in Brooklyn, TWISTED SISTER were the kings of the clubs, and A.J. was a hero to all us younger guys who wanted to play like him. I remember getting his phone number and calling him as a little kid to ask about taking lessons from him, and being blown away by how down to earth and encouraging he was. Even recently at the 'Bonzo Bash' show we both performed at last year, he asked me what was wrong and I said I didn't belong at a show like this with all these great technical drummers, being a total caveman drummer that I am. He said to me, 'Fuck that. You belong here, just like these jazz guys. You play great, bro.' Really meant a lot to me coming from him. A truly sweet man and an amazing powerhouse of a drummer, all love and respect to his family and the TWISTED SISTER family. A.J. will not be forgotten. Rest in peace, brother."

DISTURBED bassist John Moyer wrote: "I lost one of my best friends today. I'm in shock thinking about how this world needs more people like this beautiful soul. We all lost someone special today. A.J. and I took [a] picture two weeks ago in Brooklyn after playing my last gig with him in THE FOUNDRY. I'm so so sad for his family. My heart goes out to his wife Michelle, Anthony Jr. and all his kids. If you met him just once, then you know this man truly had a heart of gold. I love you, A.J. Pero. You were taken from us way too soon. Rest in peace, brother."

Commented Tod Howarth: "The news, of course, is out. A.J. Pero has passed away... I learned of it this morning and had just spoken with him yesterday pertaining to the FOUR BY FATE recording schedule for May. TWISTED SISTER's solid drummer was a great guy in the short time that John Regan and I got to know him… Thoughts, prayers out to his family first, friends and fans — perhaps all in the same."

Added legendary hard rock singer Jeff Scott Soto (YNGWIE MALMSTEEN, TALISMAN): "I'm not believing this... just got info that brother A.J. Pero, drummer for TWISTED SISTER and ADRENALINE MOB, has passed away!!! No other info or details but I am in shock... I just met the man a few months ago, we were instant bros, I am so sad for his family and bandmates... damn!"

While continuing to tour and record, A.J. has been hosting drum clinics with Tama drums, holding classes and seminars, and completing an instructional DVD. A.J. was also said to be in the beginning stages of writing a book on his life's journeys and lessons.

Video footage of THE FOUNDRY performing a TWISTED SISTER medley on February 24 at Ripper's Rock House in Akron, Ohio can be seen below. 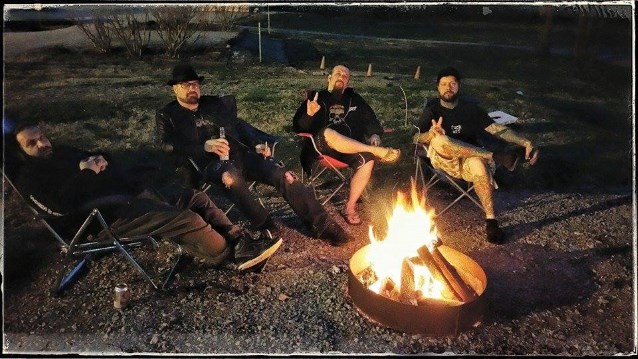