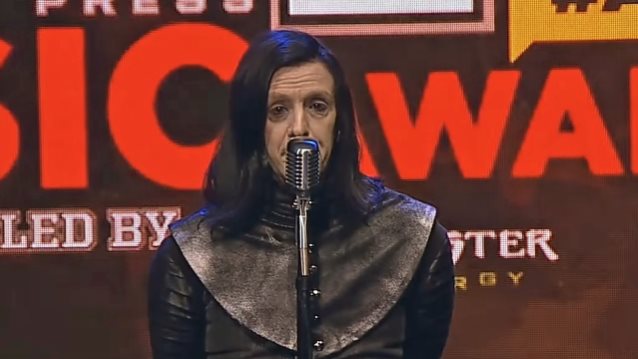 Marilyn Manson bassist Jeordie White, who performs under the name Twiggy Ramirez, has responded to accusations of rape leveled at him by his former girlfriend, Jessicka Addams of the riot grrrl band JACK OFF JILL.

In an October 20 Facebook post, Addams detailed the physical and psychological abuse that White allegedly put her through during their relationship in the 1990s, including the rape.

Although these events allegedly happened over twenty years ago, Addams said she did not go public out of shame and fear that it could damage her band's career. She wrote: "The pressure and guilt of the inevitable repercussions of my rape story affecting my band's livelihood, happiness and success kept me silent for years."

Earlier today (Wednesday, October 25), White shared a new statement responding to the accusations. He wrote: "I have only recently been made aware of these allegations from over twenty years ago.

"I do not condone non-consensual sex of any kind.

"I will be taking some time to spend with my family and focus on maintaining my several years of sobriety.

"If I have caused anyone pain, I apologize and truly regret it."

In her Facebook post, Addams described White's allegedly violent and jealous behavior, claiming that he would hit her and that he once slashed the tires of her car after she gave a male friend a ride home. Toward the end of her statement, Addams described an encounter in which White allegedly raped her at their former apartment while he was on a break from touring with NINE INCH NAILS.

Addams also described an encounter with NINE INCH NAILS' Trent Reznor that she said sent White into a rage. She recalled: "Trent Reznor was in South Florida around this time and we all went out one night. Trent and I struck up a conversation and Jeordie became so enraged he demanded we leave immediately. He began driving my car erratically on the highway, all the while punching me the chest several times, knocking the air out of my lungs."

Although she alluded to White's behavior in a 2015 interview, she said she finally opened up now in solidarity with other women who are coming forward with stories of sexual harassment and abuse in the wake of the many allegations made against film producer Harvey Weinstein.

On Tuesday, Manson fired White, saying in a statement: "I have decided to part ways with Jeordie White as a member of MARILYN MANSON. He will be replaced for the upcoming tour. I wish him well." The singer added on Instagram: "This is a sad day."

Manson, who is recovering from a broken leg sustained in a stage mishap that forced him to postpone a number of tour dates, is next scheduled to perform on November 5 at Ozzfest Meets Knotfest in Devore, California.