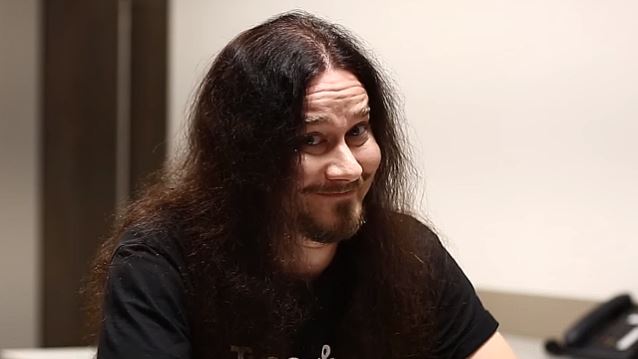 LaGrosseRadio.com conducted an interview with keyboardist Tuomas Holopainen of Finland-based symphonic metallers NIGHTWISH on November 25 in Paris, France. You can now watch the chat below. A couple of excerpts follow (transcribed by BLABBERMOUTH.NET).

On how NIGHTWISH will celebrate its 20th anniversary next year:

Tuomas: "Twenty sounds a bit boring. Maybe twenty-five. Hopefully fifty. Who knows? But no, we haven't planned anything. There'll not really be anything special. A new DVD is coming out next year, around the twentieth anniversary, maybe a bit later. But no special shows, no special tours — nothing like that — because we're aiming for the future."

On whether NIGHTWISH would ever consider doing a special tour with an orchestra or an acoustic tour:

Tuomas: "The orchestra idea has been there for a decade already. At some point still, we would like to do it, but maybe create something a bit more special. What it is, I have no clue yet, but something special will happen some day. An acoustic tour sounds really nice as well, but that's a thing for the future as well. I've always said that since NIGHTWISH began as an acoustic project, when we are sure that a certain album will be the last one, it will be acoustic. It kind of closes the circle."

On the best and worst parts of touring:

Tuomas: "Definitely playing the show is the best thing — the two hours on stage. That really completes the day, and just being with your mates on stage, playing the music, seeing people's faces and feeling the stories of the songs again and again, night after night, it's a really beautiful feeling. I don't mind the rest at all. I don't mind the waiting. I love being on the bus. There's some kind of a romantic gypsy lifestyle involved, which I really enjoy. Of course, you occasionally miss home — and maybe that's the worst part — but it's never really been an issue either. I just feel really happy and privileged to be able to do this job, if you can call it a job."

On having different singers interpret the melodies and the lyrics that he writes for NIGHTWISH:

Tuomas: "I've always been really blessed with having the best possible singers and musicians around me in the band, so that hasn't really ever been an issue. All of them have almost always immediately nailed what I was after with the lyrics, and we quite rarely talked them through really deeply. For example, with the lyrics of the new album, we didn't really go through them with Floor [Jansen, vocals] and Marco [Hietala, bass/vocals]. There were a couple of sentences that she asked me, 'What do you mean by this?' And I would tell her, but very little, so they make their own interpretation. And if it doesn't sound right to my ears, then we talk it through, but it very rarely happens. And that's what band chemistry is all about."

NIGHTWISH's "Endless Forms Most Beautiful" world tour kicked off in April this year in North America and the band has played sold-out shows in the U.S., Canada, South America and throughout Europe. The 2016 leg of the tour sees the band head to Australia, Asia and North America once again with a main-stage slot also announced for Donington's Download festival in June.

NIGHTWISH recently released a strictly limited (no reprints!) special tour edition of its current album, "Endless Forms Most Beautiful". The tour edition comes with a bonus DVD of live performances, documentary footage and promo videos as well as a huge photo gallery.

NIGHTWISH has announced a 26-date headlining tour of North America for 2016, launching in Sayreville, New Jersey on February 19, hitting six Canadian cities plus Pittsburgh, Anaheim, and New Orleans, then closing out in Tampa, Florida on March 23. Support on the tour will come from Dutch symphonic metallers DELAIN.