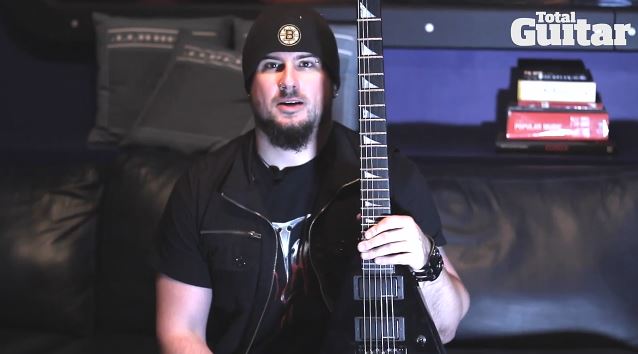 UK's Total Guitar magazine met up with guitarist Corey Beaulieu of Florida metallers TRIVIUM earlier in the year to take a closer look at his signature Jackson King V. Check out the clip below.

TRIVIUM in May parted ways with drummer Nick Augusto due to personal differences. Stepping in for him on TRIVIUM's recent dates was the band's drum tech, Mat Madiro.

TRIVIUM's latest album, "Vengeance Falls", made Top 10 chart debuts in Japan, Australia, Germany and Austria as well as a Top 15 debut in Canada and a Top 25 debut in the United Kingdom. This marked the acclaimed metallers' second consecutive Top 15 debut in the U.S. and highest-career debuts around the globe — including a No. 2 debut in Japan.

"Vengeance Falls" sold 17,000 copies in the United States in its first week of release. The record — which was produced by David Draiman (DISTURBED, DEVICE) — arrived in stores on October 15, 2013 via Roadrunner.