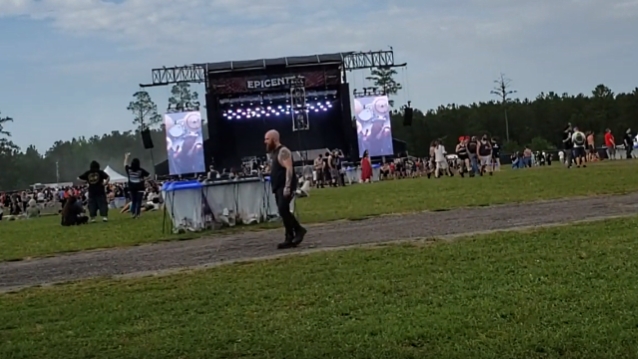 TOOL, JUDAS PRIEST and THE CULT are among the artists who had their sets canceled earlier tonight (Saturday, May 11) at the Epicenter music festival in Rockingham, North Carolina because of severe weather.

The festival organizers released a statement, saying: "For the safety of fans, artists, and staff, the county of Richmond has determined that Epicenter will not resume tonight.

"Severe weather is continuing and we need to repair damage to the site.

"Please understand that this is a difficult decision and we know how excited each of you were.

"Doors will open at 12PM tomorrow.

"Further information for ticket buyers will be emailed as soon as possible."

TOOL guitarist Adam Jones addressed the cancellation on Instagram, writing: "Thunderstorms & High Winds. Sorry #EpicenterFestival #Rockingham – We are ready to ROCK *This is the stage we are suppose to play tonight. Oops there goes our video wall County of Richmond has official cancelled but #WeWillBeback"

The cancelation came several hours after the venue had to be evacuated, and those in attendance, many of whom were camping on the site for the weekend, were urged to seek shelter in vehicles as the storms passed.

Epicenter debuted on Friday, May 10 with first-day headliners including ROB ZOMBIE and KORN.

Several ticketholders told WRAL News they were stopped in traffic along U.S. Highway 1, waiting hours for access to the festival grounds. Some gave up. Others waited hours after midnight, into the wee hours of Saturday morning, to leave the grounds after Friday's performances.

Earlier this month, Epicenter organizers said that they anticipated the festival would bring a $40 million boost to the regional economy, with a crowd of 90,000 over the course of the weekend, including 15,000 campers. Moore County hotels blocked off around 2,500 room nights for concert-goers, according to ThePilot.com.

Steve Earwood, owner of the Rockingham Dragway, which is serving as the primary site for Epicenter, told the Richmond County Daily Journal earlier this week that he had never seen a festival producer have a designated person stationed with the National Weather Service to help send immediate weather alerts, as well as the preparation for other types of potential disasters.

"They're prepared for every emergency you can imagine," Earwood said.

Please understand that this is a difficult decision and we know how excited each of you were.

Doors will open at 12PM tomorrow.

Further information for ticket buyers will be emailed as soon as possible. (2/2) pic.twitter.com/UDqr7xfwQW

~ Thunderstorms & High Winds ⛈⛈⛈ Sorry #EpicenterFestival #Rockingham ? - We are ready to ROCK ?? *This is the stage we are suppose to play tonight. Oops there goes our video wall ? County of Richmond has official cancelled but #WeWillBeback ?? footage by ultrabuddy Scott from @thecrystalmethod #Tool #ToolLive

They decided to evacuate everyone because of severe weather in the area. They say they’ll reopen once the severe weather has passed. #epicenter #epicenterfestival #thunderstorm #severeweather