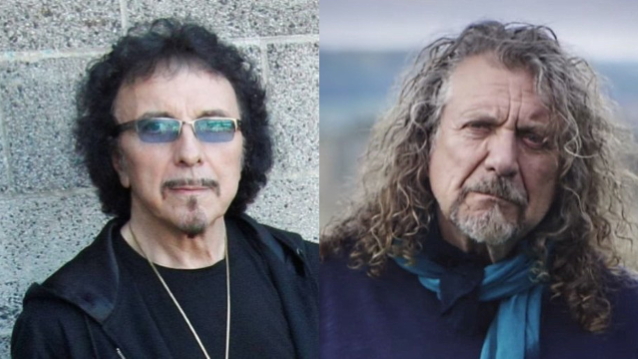 Black Sabbath Online 's Joe Siegler has shared a photo of BLACK SABBATH guitarist Tony Iommi and LED ZEPPELIN singer Robert Plant hanging out together at the Nashville airport, as they were apparently coincidentally both flying home from there at the same time. The duo appear to be looking at something on Iommi's phone while an oblivious group of people are seated behind them waiting for their boarding call.

Tony confirmed in a December 5 social media post that he had just returned from Nashville, writing: "I've had a great time in Nashville this week visiting Gibson. Thanks to Cesar for the invite, the company is in safe hands!"

In a 2005 interview with Sirius Satellite Radio, Iommi revealed that he has studio tapes of BLACK SABBATH jamming with LED ZEPPELIN during the mid-1970s.

"BLACK SABBATH used to jam with LED ZEPPELIN all the time." Iommi said. "We'd be trying to rehearse and they'd come interrupt us. I've got some tapes floating around the house."

"When we were playing clubs, [LED ZEPPELIN drummer] John [Bonham] would sometimes come along and he'd want to get up and jam," Iommi later told Classic Rock. "The first time, we said, 'Okay then.' So he got up and played Bill's [Ward, SABBATH drummer] drums and just wrecked them. Bill was really pissed off, so after that anytime John came along and said, 'Can I have a go?', Bill would go 'no' and not let him play."

The two bands even ended up jamming together in a recording studio while BLACK SABBATH was making its 1975 album "Sabotage".

"We were recording in Morgan Studios in London, and John came down to see us," Iommi recalled to Classic Rock. "He brought Planty and John Paul Jones — Jimmy Page was the only one who wasn't there. They came in and John's going, 'Let's play 'Supernaut',' 'cause he loved that song. So he sat behind the kit and we started to play it. Of course, he didn't play it right, but we just carried on and went into a jam."

He added: "We were just jamming, making stuff up. Our session went totally out of the window."

This fun pic turned up overnight. Robert Plant and Tony Iommi together at the Nashville airport, as they were coincidentally both flying home from there at the same time.


Don't know who took the picture - was a good stealth shot. I did inquire, the two didn't take a formal pic. pic.twitter.com/uRBlDd3QWn

I’ve had a great time in Nashville this week visiting Gibson. Thanks to Cesar for the invite, the company is in safe hands!