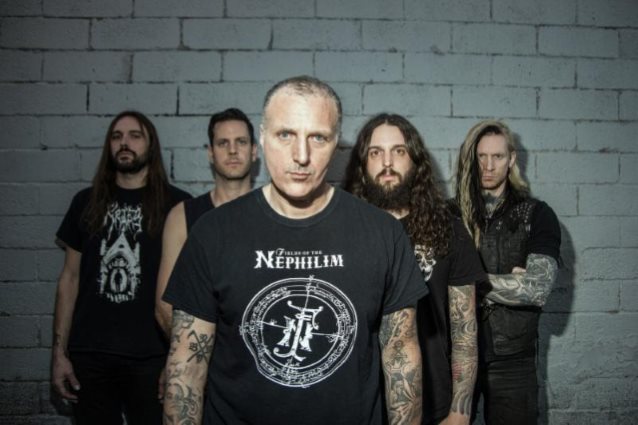 Guitarist/vocalist Mike Hill comments: "I've been gearing up for this moment for all of the past year. Rutan is a master and I'm intending on us delivering the most punishing TOMBS record to date."

Following the recording, TOMBS will return to the road in March, joining DARKEST HOUR, RINGWORM and RIVERS OF NIHIL for a U.S. journey from March 5 through March 21.

Blending bleak, post-punk minimalism with the ferocious attack of sludge and traditional black metal, TOMBS has established themselves as an act that's as committed to consistency as it is to growth, developing smoothly (but never predictably) over the course of their career, and earning a multitude of accolades along the way, including "Album Of The Year" from Decibel magazine for 2011's "Path Of Totality". In addition to their acclaimed releases, TOMBS has also become revered for their captivating live shows, touring extensively with an array of artists such as EYEHATEGOD, PELICAN, ISIS, WOLVES IN THE THRONE ROOM, THE SECRET, ULCERATE, PALLBEARER and 1349, plus appearing at renowned festivals like Roskilde in Denmark, Roadburn in The Netherlands, and Psycho California and Maryland Deathfest in the U.S.