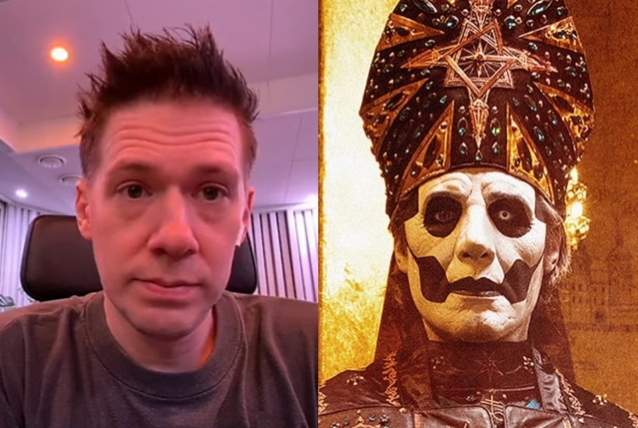 GHOST mastermind Tobias Forge spoke to Matt Pinfield of 95.5 KLOS's "New & Approved" show about the influence of punk rock on his band's musical and lyrical approach. He said (as transcribed by BLABBERMOUTH.NET): "If you get the best of punk rock 1977 to 1980, a lot of those 'hits' are the sort of music that I grew up listening to with my brother. He was also a very, very big fan of most things. He would also rave about how cool THE DAMNED were at the time, and then he would put on the EURYTHMICS and then he would put on a RAINBOW record. And that definitely rubbed off on me. I guess everything is sort of within the rock genre — just rock and pop.

"One band that actually I like a lot that I don't think people mention a lot but that also was a big influence on me and I feel close to in terms of wittiness as well as the sort of melodic language and humor was THE DICKIES," he continued. "'Dawn Of The Dickies' is one fucking bomb of a record; that's so good. In my old band, we used to play 'Infidel Zombie', a cover of that. I don't think people notice, but 'Dawn Of The Dickies', you can hear a lot of GHOST in there — or the other way around; you can a lot of DICKIES in GHOST. But people don't notice it for some reason. But the melodic language…

"Another melodic band that I also take a lot of influence off of — people don't seem to pay attention to that either — is BAD RELIGION. Musically, lyrically, but also the vocal harmonizing and all that is also very… the latter part of the '80s and early '90s BAD RELIGION. So, a lot of my singing sort of comes off of singing their songs.

"I think that a lot of the punk elements of my writing and my background might not be in super focus when I speak about music because it's not that apparent," Forge added. "But I think a lot of the humoristic element of writing — if that makes sense — comes from the punkish attitude. And also my way of singing that is, obviously, debated if it's metal or not. No — it's punk. I sing like a lot of punk bands. I sing a lot like a lot of the punk bands that I like."

In September, GHOST released a new single titled "Hunter's Moon" which is featured in the latest blockbuster installment of the legendary film franchise "Halloween Kills". The "Halloween Kills" soundtrack arrived on October 15 via Sacred Bones, with the film hitting theaters (and Peacock) the same day as well.

Produced by Klas Åhlund and mixed by Andy Wallace, GHOST's "Hunter's Moon" plays as the "Halloween Kills" end credits roll, and will be released January 21, 2022 as a collectible seven-inch single by Loma Vista Recordings. "Hunter's Moon" can be streamed, purchased, and/or pre-ordered in its vinyl incarnation. The retail version of the seven-inch will feature the special B-side "Halloween Kills (Main Title)", performed, produced and engineered by John Carpenter, Cody Carpenter and Daniel Davies.

The official music video for the infectious first new track from GHOST since 2019's "Seven Inches Of Satanic Panic" was directed by Amanda Demme.