Former STRATOVARIUS leader and current REVOLUTION RENAISSANCE mainman Timo Tolkki recently teamed up with fellow ex-STRATOVARIUS members Tuomo Lassila (drums), Anti Ikonen (keyboards) and Jari Kainulainen (current member of EVERGREY) to record a new album, titled "Return To Dreamspace". This means that the project's lineup is exactly the same as the one that recorded STRATOVARIUS' "Dreamspace" LP, originally released in 1994.

For legal reasons, the band's original name — PROJECT STRATO — had to be scrapped, although the album itself will still be called "Return To Dreamspace". 20 songs have been written for the project, including "Return to Dreamspace", "Digital Jesus", "Santiago", "Chevaliers De Sangreal", "Full Circle" and "Farewell No. 2". A spring 2010 release via JVC in Japan and Scarlet Records in Europe is expected.

"Return To Dreamspace" will see Timo Tolkki handling the vocals again and the fans of the "Twilight Time"/"Dreamspace" era will surely not be disappointed.

Regarding the musical direction of the CD, Tolkki previously said, "It has been 15 years from [STRATOVARIUS' 'Dreamspace'] album, so it will be interesting, for sure... It's not a 'remake,' but a brand new album. A closure for [what] I consider to be the end of STRATOVARIUS. It completes the cycle and returns to the beginning."

In 1982, Tuomo Lassila (drums) formed STRATOVARIUS and came up with the band's name. Timo Tolkki (guitar) and Antti Ikonen (keyboards) joined the band in 1984 — that is some 25 years ago, and as a result the group recorded such classic albums as "Twilight Time", "Dreamspace" and "Fourth Dimension". After the departure of Lassila and Ikonen in 1995, STRATOVARIUS went to more neo-classical sound and style exploring Timo Tolkki's songwriting and producing skills earning the band a Finnish Grammy and sales exceeding over two million records.

Tolkki drew up and signed an official waiver on May 20, 2008 giving up all rights to the STRATOVARIUS name. The remaining STRATOVARIUS members — Timo Kotipelto (vocals), Jens Johansson (keyboards) and Lauri Porra (bass) — have since recorded and released a new STRATOVARIUS album with guitarist Matias Kupiainen. 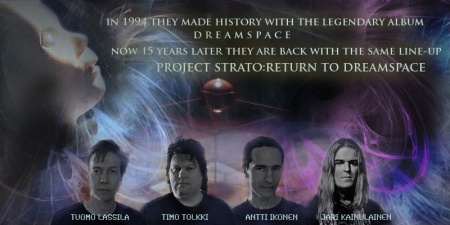