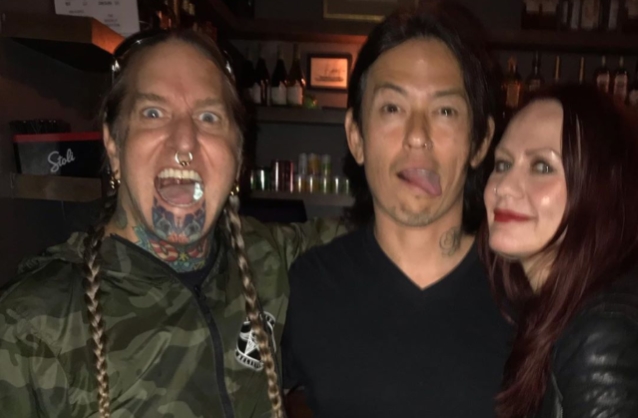 Three members of COAL CHAMBER reunited Friday night (May 10) at an undisclosed location in Los Angeles.

Earlier today, vocalist Dez Fafara posted an Instagram photo of him, guitarist Miguel "Meegs" Rascón and bassist Nadja Peulen hanging out at what appears to be a local bar, along with the following caption: "About last night 'WE' ...have no apologies ?? ????@meegsrascon @nadjapeulen @dezfafara @coalchamberofficial #FriendsPorVida #spookycore #LABand #familiaporvida #California"

Last July, Rascón said in an interview that he no longer had issues with any of the other members of COAL CHAMBER.

The group that put Rascón on the musical map and gave him his first and only gold-certified album in the shape of the band's 1997 debut, COAL CHAMBER existed for ten years before disbanding in 2003 to pursue other musical projects. They reunited in 2011 for touring purposes but it wasn't until 2014 that the group began work on a new studio album of original material, 2015's critically acclaimed "Rivals". Several months of touring activity followed before Fafara returned to DEVILDRIVER to make a new record, while Rascón went on to join GEMINI SYNDROME.

Asked if the members of COAL CHAMBER were able to put all their drama and internal fighting behind them or if those demons came back during the last tour, Meegs told SchecterGuitars.com: "It's a thing of the past. We're all older now, so we no longer have issues with each other. That's a young man's game. [Laughs]"

Rascón's comments seemed to contradict those made by Fafara, who told Australia's "Scars And Guitars" podcast that COAL CHAMBER was "not coming back" because he found out during the band's last run of shows that some of the other members of the group "can't continue" and "can't go on" due to the fact that "they're all still fucked up and in the same headspace." He explained: "When you're dealing with people that are partners, that suffer from mental illness — literally — you can't get shit done."