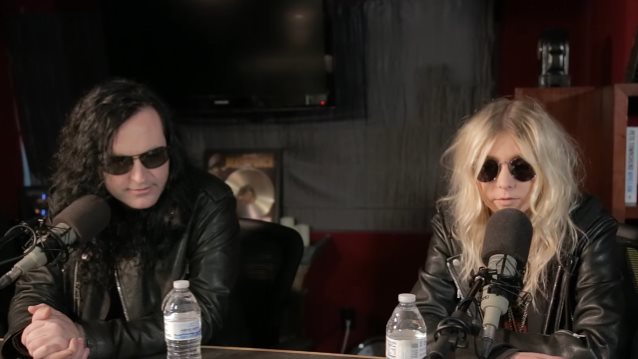 THE PRETTY RECKLESS singer Taylor Momsen and guitarist Ben Phillips were recently interviewed by veteran radio personality Jenn Marino, who in 2014 joined MÖTLEY CRÜE and SIXX:A.M. bassist Nikki Sixx as co-host of "Sixx Sense With Nikki Sixx" and "The Side Show Countdown With Nikki Sixx". You can now watch the chat below.

Speaking about THE PRETTY RECKLESS songwriting process, Taylor said: "I'm always writing, and he is too, so you're always jotting down ideas and things like that, but the real meat of the material comes when we get off tour and we actually have some time to reflect and sit with our own thoughts and work on it. 'Cause on tour, you're always working on tour, and you're always with people, and there's no alone time."

Added Ben: "It doesn't really have a method. Someone gets lucky with an idea, and we kind of go with it. But we set aside…not time, like today. It's not like on a day-to-day thing. It's, well, we're done touring, so now that's the focus. Whenever someone comes up with something, they come up with something."

He continued: "Writing's an interesting thing. It's hard to talk about, it's hard to describe."

THE PRETTY RECKLESS recently broke a record set by 3 DOORS DOWN by having its first four mainstream singles hit No. 1 on Billboard's rock chart.

THE PRETTY RECKLESS also now have the most No. 1 singles by a female-fronted rock act.

The band's third studio set, "Who You Selling For", arrived on October 21.